Tense—and intense—story about cops, criminals, and the very fine line between right and dead wrong.
Alissa Wilkinson|March 5, 2010
Our Rating

I moved to Brooklyn almost three years ago, and since then, I've discovered that there are really two Brooklyns. There's one populated largely by hipsters and yuppies (like, well, me) who love things like community gardens, obscure films, expensive beer, and espresso. The other is a lot like a Spike Lee movie or The Wire (only not in Baltimore): full of people who grew up in Brooklyn, in a long line of Brooklynites, whose street sense is unparalleled and whose lives are governed by a very specific honor code most of us will never experience.

This second Brooklyn is the world of Brooklyn's Finest—the Van Dyke housing projects in the sixty-fifth precinct, in the notoriously rough Brownsville section (home neighborhood of Mike Tyson, among others). The film winds together the stories of three policemen as they struggle with the sometimes fine line between right and wrong.

Eddie (Richard Gere) is a week from retirement after twenty-two years of less-than-exemplary service to the force when he's assigned to oversee rookies in the tough neighborhoods. His life in shambles, Eddie is barely hanging on, swilling whiskey in the morning to get out of bed. His only friend is the prostitute he frequents. Without anything to live for, the end of his rope is well within sight.

Tango (Don Cheadle) is an undercover cop working the drug beat. But he tires of the kind of attention that a black man in a black car attracts, and he's been begging for a promotion and a desk job for years. He's finally offered a way out. But is it worth taking if it means betraying a close friend—even if that friend is a known criminal?

Sal (Ethan Hawke), desperate for money to feed and house his rapidly growing family, has started eyeing the money left ... 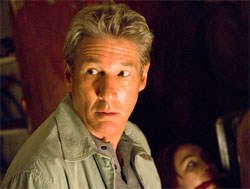