Noah Baumbach's latest has all of his signature snap and crackle, but with a little more sunshine and a little less spite.
Alissa Wilkinson|March 26, 2010
Our Rating

Noah Baumbach's films—like The Squid and the Whale and Margot at the Wedding—are full of grown people, usually related by marriage or blood, eloquently eviscerating one another. Depending on your own family history, Baumbach's incredible ear for how people really talk to one another can be awe-inspiring or panic-inducing.

His latest is a direct descendant of these flesh-eaters, but with less bite, and maybe more hope. Roger Greenberg (Ben Stiller), a Brooklyn-based carpenter, fortyish, pathologically unhappy, and recently released from a mental hospital after a nervous breakdown, returns to his native Los Angeles to dog-sit for his brother and, in his own words, "try to do nothing for a while."

Roger is the kind of person who starts his many missives to the mayor and various global corporations with, "I'm not one for writing letters of complaint." Desperate to live a life of studied humiliation avoidance, Roger stopped developing as a human at the moment he turned down a record contract—twenty years ago—to maintain his "artistic integrity." But as he starts to run into his old friends (Rhys Ifans) and loves (Jennifer Jason Leigh), it becomes clear that life has passed him by. Roger is unmoored in a sea of people with purpose.

This being L.A., Roger's brother and his wife employ a personal assistant, Florence (Greta Gerwig), who is available to help Roger out if anything goes wrong. This being Roger, things go wrong. Luckily, Florence—in her mid-twenties, with a frank smile and a generous heart—is just as unmoored as Roger is, and the two hit it off. Can two more or less feckless people in search of happiness find it in one another? 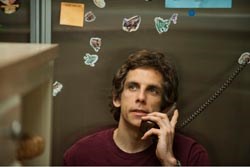