Though it says some good things about love, the comedy of two families planning a wedding is rarely clever and mostly hollow.
Tim Avery|March 11, 2010
Our Rating

Our Family Wedding is a story of two fathers getting married.

Well, not precisely. It is actually more conventional: a story of a young man and woman getting married. But their fathers — and, to a lesser extent, other family members—throw themselves into the center of affairs and complicate them.

Lucia (America Ferrera, star of the TV show Ugly Betty) and Marcus (Lance Gross) have been living together and were just secretly engaged. At the start of the film, they hop a train to Los Angeles and break the big news to their families at a joint dinner. Lucia is more than a little nervous, since her father has never even heard of Marcus until now. Plus, no one in her family knows that she's been living with him or that she's dropped out of law school so that she can go with him to Laos, where he will work with humanitarian group Doctors Without Borders. So when she and Marcus share the news, Lucia decides to cover up the fact that she's been living with Marcus and isn't finishing law school. Even so, the announcement sets off a firestorm, and the families don't exactly hit it off.

Lucia's family is Mexican American and Marcus's is African American, and Our Family Wedding plays this up as a comedy of culture clashes. This set-up has been done before—think My Big Fat Greek Wedding—but this is more unusual in that both families are ethnic minorities. I was interested to see what might come of this.

Not a whole lot does, unfortunately. Racial verbal jabs abound, but they are predictable and not particularly funny. (Full disclosure: I'm white.) And we are never convinced that anyone really means what they say. Lucia's father, Miguel (Carlos Mencia), and Marcus's father, Bradford (Forest Whitaker), engage in most ... 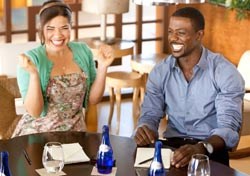