Master producer and musician Aaron Sprinkle talks about his work, including his latest album with Fair—and how making an album is a revealing process.
Mark Moring|March 23, 2010

Why is the band called Fair?

We were just looking for a cool, short name that wasn't taken. Plus, it gives music writers some extra ammo if they don't like us.

I hear that you're typically insecure about your own music.

Putting out a record can be a very vulnerable thing. You're essentially asking everyone to be a critic of something you created. For me it's hard to not wonder what people will think and get a little freaked out. But in the end, it's about committing to what you think is working, going with your gut, and praying that God is in the mix.

What are you trying to communicate with this album?

The record is about how hard life can be, and how God's grace is bigger than all of it. Life is hard. In the past couple of years, my wife and I have dealt with a complicated pregnancy, financial troubles, family members passing, mortgage troubles, and working in an industry that is drastically changing. I'm a husband and the father of a toddler, which at times can be as difficult as it is rewarding. But I try to write about real life—the ugly, the beautiful, and everything in between—and that really came through on this album.

They are both amazing. Producing is more about bringing someone else's vision to fruition, ... 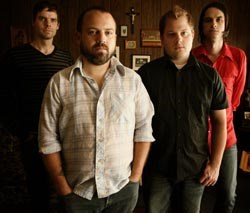