Romantic comedy is heavy on sex and light on substance.
Brett McCrackenNovember 24, 2010
Our Rating

When something is referred to as "drug," it is often because that thing is thought to be either addictive, pleasurable, pain-reducing, or ailment-curing. Love and Other Drugs is a film that suggests that love is a drug in all of these senses. Unfortunately it's also a film that, like many drugs, provides us with more harmful side effects than positive benefits.

Based on a memoir by former Viagra salesman Jamie Reidy, Love and Other Drugs centers around an unlikely pair of lovers: Jamie Randall (Jake Gyllenhaal), a smooth-talking, yuppie frat boy pharmaceutical salesman, and Maggie Murdock (Anne Hathaway), a fiercely independent bohemian artist who, at 26, already has Parkinson's disease. The film begins promisingly, with a funny and insightful look inside the world of "Big Pharma" at a time (the late 1990s) when the commercialization/marketing of drugs was exploding in America. But it quickly becomes apparent that, as unconventional and quirky as the film aspires to be, it's largely just an exercise in clichÉ.

Directed by Edward Zwick, Love and Other Drugs follows a painfully familiar story arc: Suave, charming playboy (Gyllenhaal) sleeps with a new woman every night, afraid to make commitments or care too much about any of them. One day, he meets a female version of himself—a beautiful woman (Hathaway) who loves sex but avoids love. They decide to have a no-strings-attached arrangement that consists in nothing more than daily sex romps. Sound familiar? That's because last year's Up in the Air had an almost identical plot setup.

In spite of their insistence on a sex-only, "I hardly even know your name" relationship, Jamie and Maggie (surprise!) gradually form a relational bond because, as much as they don't want ... 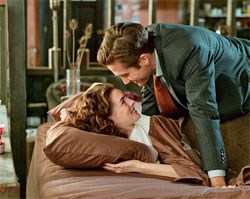