This thriller about a teen assassin packs plenty of visual style, but the story rings surprisingly hollow.
Josh Hurst|April 8, 2011
Our Rating

You've got to hand it to director Joe Wright, at least for this much: He's moving farther and farther outside his wheelhouse as a filmmaker. And good for him—for a while, it was looking like he was destined to be the new go-to guy for period pieces, the spirit of Merchant and Ivory rolled into one young man. And that wouldn't have been such a bad thing; his first two films—Pride and Prejudice and Atonement—were both practically perfect, sumptuously stylish but also heavy on heart, rich in ravishing romance.

But his attention started to drift away from costume dramas with The Soloist, and now, with Hanna, he's ventured into something altogether different. This one is an action thriller, echoing any number of popular shoot-'em-up suspense flicks but perhaps none more than the bracing and brainy Bourne movies. But Hanna is nowhere close to perfect, the easy elegance and effortless grace of Pride and Atonement giving way to a jolting mash-up of styles and concepts. It's not a smooth ride by any means, but it is, if nothing else, a very interesting movie for its steady deployment of ideas alone.

The plot itself is a puzzle, one in which you have most of the pieces from the beginning but don't see the big picture until the climax. The movie starts in a snowy forest, where a young girl named Hanna (Saoirse Ronan, from Atonement) is being raised by her father, Erik (Eric Bana, from Star Trek and The Time Traveler's Wife) in what appears to be complete isolation. There's something very strange about their circumstances from the beginning; we notice that Erik is training his daughter to be a proficient (and mercilessly brutal) hunter, that she is fluent in several languages, and that she has a wealth of knowledge about ... 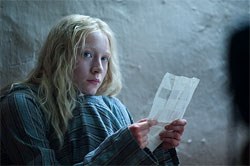