The original was charming, but this convoluted sequel tries too hard to appeal to kids and adults.
Russ Breimeier|April 29, 2011
Our Rating

The first Hoodwinked movie (released in 2005) was a charming sleeper among animated features. The animation was second-rate, but the cute and clever premise overcame that, depicting the varying perspectives from the classic Red Riding Hood story while meshing it with modern elements. Several Christians were also involved in creating the film, making it wholesome fun—something that could easily stand alongside the VeggieTales series in your home library.

The sequel is not as good, but then few sequels are. The creative team behind the first film has reunited for Hoodwinked Too! Hood vs. Evil, including most of the voice cast—though Hayden Panettiere fills in for Anne Hathaway as Red Riding Hood. Even the same writers are back on board, though Mike Disa steps into the director's chair this time. So it's not really a matter of newcomers hijacking a franchise that undermines this movie, but knowing when to leave well enough alone.

The story is basically Shrek meets Kung Fu Panda and The Incredibles—a convoluted mishmash of ideas from other successful animated features, blended together into a garbage soda with far too many pop culture references for its own good (and most of them too adult for kids).

The returning characters now all work for the Happily Ever After agency (HEA) run by that dapper frog Nicky Flippers (David Ogden Stiers). The Big Bad Wolf (Patrick Warburton), his squirrely sidekick Twitchy (co-writer Cory Edwards), and Granny (Glenn Close) are on assignment to rescue Hansel and Gretel (Bill Hader and Amy Poehler) from the clutches of Verushka the Witch (Joan Cusack). But their Mission: Impossible–styled rescue backfires and leads to Granny's capture during Verushka's escape with the children. ... 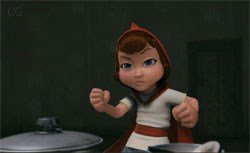