Too dull for kids, too inane for parents. Like a chocolate bunny—pretty but hollow.
Camerin Courtney|April 1, 2011
Our Rating

When you hear the plot of Hop—a high-concept Easter movie about an animated slacker heir to the Easter Bunny title (voiced by wacky bad-boy Russell Brand) who really wants to be a drummer—you know you're going to get one of two films. Either it'll be a quirky little animated gem like last year's Despicable Me (from the same production company that made Hop) … or it'll be like a cartoon root canal for your brain.

Sadly, Hop is the latter.

We start at Easter Island (oh, the cleverness is just beginning), where the Easter Bunny (voiced in proper British by Hugh Laurie) is grooming his young son E. B. to be his eventual replacement. The thing is, E.B. doesn't really want to take over this fanciful candy factory and the task of delivering Easter baskets worldwide every spring. He'd rather play drums in a rock band.

So, just before the ceremony where he takes over the family business, E. B. escapes to the real world—to Hollywood, of course, where entertainment dreams come true. He bumps into Fred O'Hare (James Marsden), a fellow jobless slacker who happened to catch a sneak peek at the Easter Bunny when he was a young boy. Moved by this connection, Fred reluctantly allows E. B. to crash with him at the mansion he's house-sitting for the week.

During his stay, E. B. manages to (surprise!) trash the mansion, seemingly disturb no one that he's a talking animated bunny, and make it on David Hasselhoff's TV show, Hoff Knows Talent. There's also an odd cameo by the Blind Boys of Alabama, some unfunny references to the Playboy Mansion (bunnies, get it?), and an unfortunate ventriloquist number of "I Want Candy."

Back at Easter Island, E. B.'s dad is distraught that his son is missing. And he's also clueless that his ... 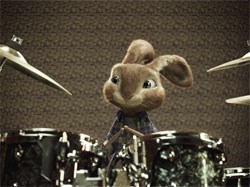