As 'Dawn Treader' releases to DVD, Walden's president says despite declining numbers, they're moving ahead with the next Narnia film, 'The Magician's Nephew.'
Mark Moring|April 7, 2011

It's been a little over a decade since Walden Media acquired the film rights to C. S. Lewis's Chronicles of Narnia, and for Walden co-founder and president Micheal Flaherty, it's been an exhilarating ride—even if it has been something of a roller-coaster.

The Lion, The Witch, and The Wardrobe opened in December 2005 to a massive audience, earning more than $1 billion in box office ($745 million) and DVD sales ($332 million) combined. Critical reviews were good (76 percent positive at Rotten Tomatoes), and the franchise was off to a great start.

But then came the next two films—2008's Prince Caspian and 2010's Voyage of the Dawn Treader. Caspian brought in less than half of the domestic box office that LWW had drawn, and VDT only about a third as much. Critical ratings at Rotten Tomatoes dropped from 76 percent positive for LWW to 67 percent for PC to a tepid 50 percent for VDT, which releases to DVD and Blu-Ray this week

With the dropping numbers, we asked Flaherty if the franchise was in trouble, and if not, which of the Chronicles would be the next film? The Silver Chair comes next in the sequence of books, but Flaherty said Walden and 20th Century Fox, which distributes the movies, have mostly decided on The Magician's Nephew—Narnia's "origins story"—for their next project. (Narnia scholar Devin Brown says Lewis himself would agree with that choice; see his reasons here.)

Why do The Magician's Nephew next?

It's a creative decision in terms of what story we felt has the best opportunity to draw the largest audience. The box office has pretty closely followed the sales pattern of the books. Prince Caspian sells about half of the books of Lion, Witch and the Wardrobe, and it did about half of the box office. Caspian sells about a third more books than Dawn Treader, and it did about a third more box office. That pattern continues to decline with Silver Chair being the weakest book in the series in terms of consumer demand.

We just think the origin tale of The Magician's Nephew is a great one, and it brings back the characters that have proven to be the most popular—a lot of Aslan and the White Witch. It explains the origin of the lamppost and the wardrobe. The order of these books is something that few people agree on anyway. While Silver Chair certainly continues Eustace's adventure, we never knew when Magician's Nephew would come in the sequence of films. We never assumed it would be last, and we never assumed it would be first.

A lot of people say The Magician's Nephew is their favorite. 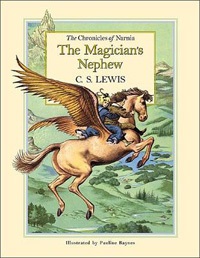 In book sales, it is right behind The Lion, The Witch, and The Wardrobe. If you look at the superhero stories or any great franchise in recent years, they all have an origin story. We've yet to make our origin story. But rather than lead with Magician's Nephew, we're following Lewis's lead on this—that it's a lot more interesting if you've been teased with these things, like the wardrobe, rather than explain it right up front. Once people are familiar with the lamppost, the wardrobe, Narnia, and Aslan, Magician's Nephew is a lot more powerful, to go back and explain where all of this came from.

Dawn Treader did poorly in the U.S., but quite well with the foreign box office. Did the low domestic numbers prompt any conversation of calling it quits?

No, because international box office was so strong—three times the domestic. We always look at these things from the international standpoint, that cumulative number.

Why has the domestic box office dipped significantly with each of the three films, while the foreign has remained fairly strong? Domestic accounted for 39 percent of the earnings for Wardrobe, 33 percent for Caspian, and just 25 percent for Dawn Treader. Can you explain?

We're trying to figure that out. But we don't want to hold things up with a lot of navel gazing, either. That's why we're anxious to get into Magician's Nephew.

When you first started making these movies, did you have any clue that the foreign box office would account for, on average, two-thirds of the earnings?

No. So much has changed in the business. The DVD business continues to evaporate, and there are so many other decisions that go into this. But when you look at some of the foreign territories where we did really well, those are territories that are adding theaters furiously. So the box office size is actually expanding in places like Russia that we never would have predicted ten years ago that would generate so many admissions. There's a pretty healthy theater expansion in a bunch of different markets overseas.

Are you saying the American market hasn't necessarily gone down, but that the foreign market has just exploded, thus explaining the percentages?

If the Narnia books were being written and released today, I wonder if we'd have midnight Narnia release parties like with Harry Potter and Twilight.

The Lion, The Witch, and The Wardrobe was nominated for three minor Academy Awards, but neither Caspian nor Dawn Treader got any Oscar nominations. Critical reviews have been more negative with each film. Do these things frustrate you?

The Oscar stuff doesn't frustrate us; that's a blessing any time you can get a nomination. But yeah, we'd much rather have better critical response. We don't live in a state of denial. And when you see some of these reviews, you just try to get better with the next one.

Secular critics aren't sticklers for whether the films stick to the books; they're mainly judging the movies as movies. But some reviews and opinions are from "Narnia police" types—people like me who nitpick every detail.

Right, but you know what? It's those Narnia police types—the people who understand these books and who love Lewis—that we really pay attention to. There's a lot of people who want to see these films succeed. So when folks who really know Narnia see it and don't like it, we take that a lot more seriously than we do the reviewer who doesn't really have a real interest in the book. Some of the things we get criticized for by secular critics are the fact that, oh, it's too heavy in the faith message. So sometimes you can't succeed. The things that some critics criticize you for are the things that the Narnia fans will praise you for. So we try to err in the direction of the people that love these stories.

So what kind of reaction are you getting from those people about Dawn Treader?

There's agreement that we are getting things right thematically. In terms of Reepicheep with that Aslan-size hole in his heart, getting that right. In terms of Eustace talking about no matter how hard I tried I couldn't do it myself, the idea that redemption is something that has to be given; it can't be earned. For the most part people have agreed that we've done a good job with those themes.

The part I was most disappointed in was the un-dragoning of Eustace. I know that for the sake of children, you couldn't show Aslan ripping Eustace apart. But it didn't seem evident that Eustace had first tried to tear off his skin, on his own. We just saw him scratch his chest one time, and then we saw Aslan pawing at the sand, and then we saw this transformation. Have you heard complaints that the un-dragoning wasn't handled well? 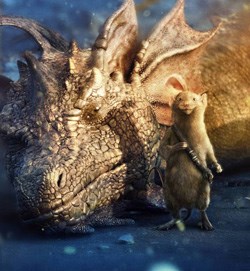 Eustace the dragon and Reepicheep the mouse

Yes. And we could see that coming even before we showed anyone the movie. What's interesting is that when you read the book, you actually don't see that scene; Eustace just recounts it when he gets back in the boat. We wanted to show it, but what we ended up doing was reinforcing that message when Eustace says later, "No matter how hard I tried, I couldn't do it myself. And then he came towards me. It was a good hurt." Visually, I was pleased with it. But yes, there was a response where people wanted to see lion paw firmly placed in dragon flesh and ripping it off. That was a common disappointment.

Another big thing for people is Aslan's speech in the end, when he tells Lucy she'll know him by another name in her world. That dialogue was kept in the film, but I've heard there were some feisty conversations about that and that some people wanted to cut it.

With all the Aslan parts, particularly the dialogue, there's always a very spirited and healthy discussion, and generally any time there's a discussion, the tie goes to C. S. Lewis. So we always come to the agreement, "Listen, let's not think that we can reinterpret this and do a better job than Lewis. If we disagree about this, if people think there are different ways to say this, let's just make sure we preserve what Lewis said." That's a mistake we made with Prince Caspian, where we changed Aslan's dialogue with Lucy. [In the book, Lucy says: "You're bigger, Aslan." Aslan replies: "That's because you are older, little one." Lucy: "Not because you are?" Aslan: "I am not. But every year you grow, you will find me bigger." In the film, Aslan says to Lucy: "Every year you grow, so shall I," which carries quite a different meaning.] We didn't get that one right. We learned our lesson from that. And so as we were trying to figure out the dialogue with this one, we decided that we would just go back to verbatim what we had in the book.

Ever have any regrets about taking on the Narnia movies? Nobody badgers you with 20 questions about How to Eat Fried Worms or City of Ember [two of Walden's box-office flops]. But people will rake you over the coals when it comes to Narnia.

Right, but it's a pretty small price to pay to be able to wake up in the morning and come in and work on these movies for the last decade. So the hardest thing is knowing that, my goodness, our greatest accomplishments with this franchise might be behind us. Because there just aren't that many series out there like this. That's the only place where the real regret comes in. In every dimension of the word, it's such a complete blessing to be able to do these movies. And the real side benefit is working with Douglas Gresham [C. S. Lewis's stepson and a producer on all the films], and getting to hear all these stories about Lewis that aren't even in the books. In the end, we really like the healthy accountability that exists with these films.

1 of 3
Eustace the dragon and Reepicheep the mouse