Source Code, director Duncan Jones's second feature film, is patently bigger, faster, slicker and more mainstream than his impressive debut film Moon, but it's a work of similar intelligence, themes and interests. Jones didn't write the sci-fi thriller, and Ben Ripley's screenplay pointedly echoes Groundhog Day, Déjá Vu, Frequency, Avatar, "Quantum Leap" and vehicular thrillers from Speed to Unstoppable—but you can understand why the screenplay immediately made people think of the writer-director of Moon, and why Jones couldn't resist the project.

One could almost regard Moon as a warm-up for Source Code. Both films center on a solitary grunt who's a cog in a much larger machine—an isolated man squirreled away in a cold, metallic space, unable to contact his loved ones, unsure exactly what's going on, caught up in the seemingly impossible circumstances of a mission he doesn't entirely understand. Both films raise questions of identity, memory, and human dignity in dehumanizing systems.

Neither film is perfect, and while Moon's charm lay in part in its appealing modesty, Source Code ambitiously bites off a bit more than it can chew. On the other hand, Source Code delivers the plot twists and revelations that never quite materialized in the low-key Moon, and Jones proves along the way that he can handle a more complex story with a sizable cast and multiple locations. Oh, and like Moon, Source Code is more enjoyable the less you know going in (and many reviews give away too much).

Here is what can safely be said. Air Force captain Colter Stevens (Jake Gyllenhaal), a helicopter pilot and Afghanistan vet, wakes up one fine morning on a train in another man's body. Opposite him is a lovely woman named Christina ... 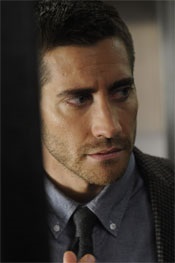