The latest from the director of Zombieland falls short of its predecessor's cleverness.
Alissa Wilkinson|August 12, 2011
Our Rating

True confessions: Zombieland, directed by Reuben Fleischer, is one of my favorite movies from 2009. It was funny and clever and innovative. I loved the sweet, nerdy hero (played by Jesse Eisenberg of The Social Network and Adventureland, for whom I have an enormous soft spot); the blustery but soft-hearted zombie hunter (Woody Harrelson); the tough, funny sisters (Emma Stone and Abigail Breslin).The movie winked and nudged its way through pop culture references and a cheery apocalypse, and gave us reason to root for its characters.

So maybe I'd set my hopes too high for 30 Minutes or Less, Fleischer's latest. But really: is it too much to hope for an interesting narrative, or a single sympathetic character, or maybe a female who doesn't exist just as a sort of point of contention between two dudes?

30 Minutes or Less centers around twentysomething pizza delivery boy Nick (Eisenberg) who, by all appearances, has pretty much given up on life beyond watching action movies, playing Call of Duty, and earning a little money. He lives in his native Grand Rapids with his childhood best friend Chet (Aziz Ansari of Parks and Recreation), an elementary school teacher. Nick likes Chet's sister a lot, but she's moving to Atlanta for a job, on her way up in the world.

Grand Rapids is also home to Dwayne (Danny McBride), a middle-aged loser who lives with his lottery-winning ex-Marine father and hangs out mostly with the dimwitted Travis (Nick Swardson), the sort of guy who doesn't know how to tell a "that's what she said" joke properly. Dwayne hates his father—who, rather reasonably, hounds him to get a job—and realizes that the best get-rich-quick scheme would simply be to knock off the old man and inherit his considerable ... 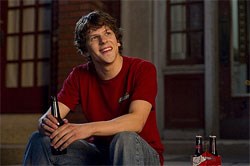