Fairytale for grown-ups offers plenty of scares, but not much else.
Brett McCracken|August 26, 2011
Our Rating

Have you ever wondered what lore and legends might lay behind the idea of the tooth fairy? If so—and especially if you always suspected that the tooth fairy was a tad bit sinister—Don't Be Afraid of the Dark might be a movie for you. In this version, the tooth fairy isn't a singular, angelic being who gives children money in return for lost teeth; rather, it's an army of creepy crawly Gollum-like creatures who come out at night and prey on little children—and not just for their teeth.

To be sure, Dark is not a fairy tale for kids. It's a decidedly R-rated, scary fairy tale for grown-ups. Produced by Guillermo del Toro, Dark bears resemblance to the Mexican filmmaker's acclaimed 2006 film, Pan's Labyrinth, which also featured a child protagonist interacting with monsters and fairies from some imaginary underworld. But while Labyrinth managed an intelligent and layered picture not just of fantasy and thrill but also social and human commentary, Dark is mostly just a "gotcha!" horror film to make audiences squirm, jump, and feel afraid.

Helmed by first-time director Troy Nixey and based in part on a 1973 TV movie, Dark follows the frightful experiences of a family after they move in to a gothic-style 19th century mansion with plans to restore it. Things begin innocently enough for Alex (Guy Pearce), his girlfriend Kim (Katie Holmes), and Alex's young daughter Sally (Bailee Madison), but then things start going bump in the night. Sally has encounters with creatures who scurry around under her bed, her teddy bear is found beheaded, Kim's dresses are shredded by an unknown vandal, and one afternoon the mysterious groundskeeper (Jack Thompson) falls victim to knife-wielding beasts in the newly discovered creepy ... 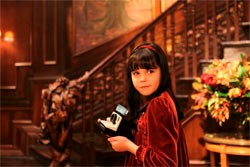