Rhoda Williams (Brit Marling, who also co-wrote the film with director Mike Cahill) has just been accepted into MIT's astrophysics program. She's young and bright, but reckless. While driving home drunk from a party one night she slams into another car, killing a pregnant woman and her young son. The woman's husband, John (William Mapother), survives but stays in a coma for months.

So instead of going off to college, Rhoda goes to jail for four years. The next time we see her, she's being released, moving back in with her family, and getting a job as a janitor to avoid other people. When she goes to John's house to apologize for ruining his life, she loses her nerve, claims she's offering a free trial from a local cleaning service, and winds up cleaning his house over the successive weeks. And it needs cleaning, as John, once a successful composer, has turned into a reclusive drunk. These weekly interactions slowly change both Rhoda and John.

While all of this is unfolding, a newly discovered planet is moving closer to Earth, finally hovering in the sky at about five times the size of the moon. When authorities try to make contact with the planet, they discover this is some sort of second Earth, with a duplicate of each of us living on it. Plans are made for an initial visit.

One of the most striking things about Another Earth is the juxtapositions. Rhoda is an aspiring scientist, John is an artist. Lives are being lost and ruined while a whole new planet full of life is discovered. An emotion-drenched drama is unfolding in a grieving man's house while a staggering scientific discovery is looming in the night sky. These contrasts work well and add extra dimension to the human experiences and emotions.

The other striking thing ... 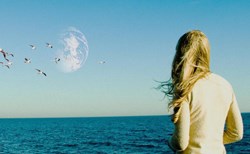