A ridiculous remake marking the return of the B movie, while glorifying violence and degrading women.
David Roark|August 19, 2011
Our Rating

In a scene leading up to Conan the Barbarian's big bloody finale, the epic warrior's love interest poses a seemingly vital question. Amid all the death and destruction surrounding her, she asks Conan: "Are we all just doomed to chaos and ruin?" After a brief pause, the barbarian shrugs off her question and shares his true feelings: "I live. I slay. I love. I am content." These words, instilled with all the ridiculousness of a typical B movie, sum up the spirit of Conan quite well. The film is dumb, hackneyed and, well, just plain bad—much like the 1982 original, starring Arnold Schwarzenegger—but because it knows and makes fun of that, it plays for a smart and entertaining ride.

Directed by Marcus Nispel, who up to this point hasn't made anything good, Conan is a stereotypical guy's movie with all the typical testosterone—sex, violence, vengeance. The plot follows the strapping Conan, played to perfection by Jason Momoa, on a quest to avenge his father's death. At the beginning of the film, a ruthless warlord (Stephen Lang in another over-the-top role), alongside his henchmen and sorcerer daughter (Rose McGowan), murders the beastly leader right in front of his young son, and the experience provokes Conan to spend the rest of his life hunting down the wicked villain.

This dimwitted revenge story doesn't drive the film. Instead, it's a mere plot device for 112 minutes of blood, guts and action—and a cheesy, slow-motion sex scene. Of course, with an opening sequence that shows the graphic birth of Conan on a blood-spattered battlefield and a title that invokes the image of one famous Austrian actor sporting stallion-like hair and a leather girdle, it's unreasonable to expect anything more. Nispel, in ... 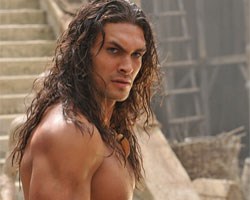