A woman's experience with Christianity—from the certainties of new conversion to later struggles with faith. PLUS: Interview with Vera Farmiga.
Frederica Mathewes-Green|August 26, 2011
Our Rating

When evangelicals hear that there's a new movie about their brand of Christianity, they get nervous. All too often they are presented as idiots or villains. Stereotypes about narrow-mindedness, intolerance, cultish mind-control, and harsh subjugation of women abound.

Carolyn Briggs' 2002 memoir, This Dark World: A Memoir of Salvation Found and Lost, hit a number of those notes. When their church leaders counsel her not to get a college degree; when they counsel her husband to forgo a plum job opportunity because they instead need the headship of the church leaders; when she refused medication during a complicated pregnancy and scoffed at taking shelter during a tornado—well, it sounds to many evangelicals like a pretty kooky church, if not a cult. But don't expect the general public to make that distinction. CT's review of the book said it was "likely to win plaudits for its savaging of evangelical Christianity as the source of one woman's oppression, and her abandonment of that faith as a fount of liberation."

News that This Dark World, retitled Higher Ground, was coming to movie screens did not cause Christians to throw out the red carpet. And yet—what a surprise. This movie presents a church that is really endearing. It's a small community, and we meet them first in the 1970s as a gang of Jesus Freak hippies, gathered for a joyous, noisy river baptism. The guys are long-haired and bearded and have amiable, sweet expressions. The women wear prairie dresses and have personalities.

Corinne—the lead character played by Vera Farmiga, who also directed the film—is extra-bright but subdued, an observer. When, in an early scene, her boyfriend makes love to her in a meadow, he has an ecstatic experience while ... 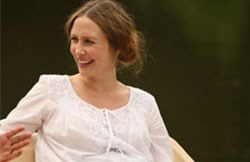