Pro-democracy protests in the Middle East and North Africa have demonstrated the power of nonviolence in birthing political change. In 2003 and 2004, a milestone in the history of nonviolent action took place near the Palestinian village of Budrus. Israel was building its Separation Barrier between Israel and the Palestinian Territories. But near Budrus, the barrier veered from the border and cut through the village's olive groves.

Because Budrus's economy depends on those trees, villagers confronted the construction workers and border police. A documentary recently released on DVD, Budrus (JustVision), details the work of Fatah leader Ayed Morrar, who coordinated with a local Hamas leader and later with Israeli activists to protest the bulldozing of the olive trees and eventually to get Israel to move the fence. The film also pays tribute to Morrar's daughter, who transformed the dynamics of the protest by insisting that women be allowed to participate.

Unlike the nonviolent work of Sami Awad, featured in the 2010 documentary Little Town of Bethlehem, Morrar and his companions never eschew violence on principle, but treat nonviolence as a mere tactic, a practical way to provoke public sympathy. 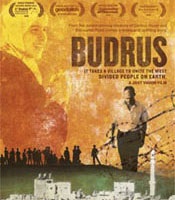