A laughable prequel with shoddy visuals and a lackluster plot.
David Roark|August 5, 2011
Our Rating

Everything inside of me wanted to like this prequel. I've always appreciated the original Planet of the Apes and the depth that Rod Serling brought to its script. Plus, I had more recently begun to think that James Franco, the star of the film, really knows how to act. The young actor showed signs of early De Niro for his Oscar-nominated performance in 127 Hours, making us laugh and cry in just one scene. Unfortunately, after watching Rise of the Planet of the Apes, my hopes remain unsatisfied. The prequel doesn't just fail as mindless entertainment with unconvincing visual effects, a clunky script, and a lackluster plot. It disrespects its predecessors by ignoring the philosophical implications that made their subject so pertinent.

Set in San Francisco, the new film centers on a young scientist named Will Rodman, played not so convincingly by Franco. Will is consumed by finding a cure for Alzheimer's disease because his father, Charles (an uninteresting John Lithgow), suffers from it. In doing this, he and his team of scientists test a special drug on apes that, as the opening sequence depicts, actually works.

The project predictably comes to a quick end when an experiment goes wrong and leaves Will and his ailing father at home with a baby chimpanzee named Caesar, who turns out to have human-like intelligence inherited from his lab-raised mother. Will, growing more and more frustrated by his dad's condition, decides he has nothing to lose and proceeds to test the drug on Charles. And it works.

After this breakthrough, the film transitions from bland to cheesy within minutes. Will, Charles, and Caesar are one big happy family. They play together. They eat dinner together. Will and Caesar even communicate with each other through ... 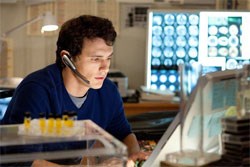