A powerful film about a real-life woman who fought the horrors of sex trafficking in post-war Bosnia.
Camerin Courtney|August 12, 2011
Our Rating

Movies about issues as tragic and uncomfortable as sex trafficking are tricky. You can make a wonderfully crafted, informative film—that no one comes to see. Moviegoers may know they should, they just don't want to.

That's just one of the reasons the story of Kathy Bolkovac is so amazing. Her story provides a somewhat palatable entry point into a horrifying reality. We like stories of whistleblowers. We root for these lone soldiers fighting the system. They appeal to us in a time when we often feel at the mercy of bigger forces beyond our control—the national debt crisis, the gridlocked political system, the wildly fluctuating DOW.

Bolkovac, a real woman, was a Nebraska cop who took a job as a U.N. peacekeeper in Bosnia in 1999. Her ex-husband had gotten a job out of state and was taking their daughter, whom he had custody of, with him. Unable to find a job in that area, Bolkovac decided to try the peacekeeping gig for six months to earn some money—$100,000 tax-free, to be exact—and buy her some more time to find employment near her daughter.

Bolkovac went to this war-torn land with noble intentions of helping to restore order. And when she got there, she quickly learned that the even greater need was rescuing young women from the sex trafficking industry.

Bolkovac joined forces with the Women's Rights and Gender Unit, and began to investigate the trafficking rings operating out of the local bars. As if the horrors of young Eastern European women being lured to Bosnia under the auspices of legitimate jobs in hotels and then forced into prostitution and kept in slave-like conditions wasn't bad enough, Bolkovac discovered that their customers included U.N. peacekeepers and international military forces—the ... 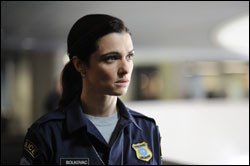