A quiet, profound meditation on martyrdom, based on a true story of Trappist monks.
Katelyn Beaty|February 25, 2011
Our Rating

There may be hope for France yet. At the 2010 Cannes Film Festival, held in the southern region of a country whose official religion is none at all, a film about Christian hope was given the Grand Prix, the festival's second highest honor. (It went on to snag several more prestigious French film awards.) That audiences knew beforehand that the film ends in the murder of eight Catholic monks makes its warm reception all the more striking. Add the fact that the film fixates on praying to Christ and chanting the Psalms, and you've got yourself a mystery in the homeland of Marquis de Sade.

Of Gods and Men (in French, with English subtitles), now in limited release in the U.S., explores the spiritual anatomy of a community of Christians whose love is tested by imminent violence. Taking its name from Psalm 82 ("I said, 'You are "gods"; you are all sons of the Most High,' but you will die like mere mortals"), the film recounts the 1996 Tibhirine massacre, in which seven French Cistercian monks, living in a monastery in Algeria, find themselves caught in conflict between Algeria's government and the Armed Islamic Group. The monks were later kidnapped and beheaded; their bodies were never found. Fifteen years later, amid ongoing investigations, the precise circumstances of their deaths are unknown. While director Xavier Beauvois clearly pays homage to the monks, he isn't interested in solving that mystery as much as asking why the men didn't try to save their lives in the first place.

The answer, the film suggests, lies in the men's devotion to God, expressed in daily worship, prayer, and caring for the Muslim villagers with whom they share a quiet countryside. The film's structure follows that of monastic life, moving from extended ... 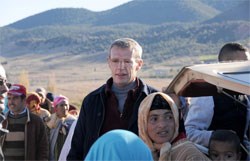