The deeper implications are void because this thriller lacks thrills.
David Roark|February 18, 2011
Our Rating

In Unknown, the latest thriller from Jaume Collet-Serra, there's a scene in which Liam Neeson, playing Dr. Martin Harris, discovers some shocking information about his identity. The moment, which implies some kind of existential subtext, evokes the finale of last year's Shutter Island, when Leonardo DiCaprio's Teddy Daniels realizes that he's not the man he thought he was. But whereas Scorsese used the twist to reveal profundities of the human condition, Collet-Serra employs the element to merely surprise us, only brushing the surface of the complex issues proposed. This missed opportunity sums up the film as a whole. Though at times seemingly redeemable because of Neeson and his chemistry with Diane Kruger, Unknown plays out as a series of fascinating concepts and crises that are never realized or moored by a sense of urgency.

The story, based on the novel Out of My Head by Didier van Cauwelaert, centers on Neeson's Harris, whom we meet flying to address a global summit on biotechnology. Upon arriving in snowy Berlin alongside his Barbie doll wife, played ineffectively by Mad Men's January Jones, he soon finds his life turned upside down. A terrible car crash leaves him in a coma for four days. When he awakes, he discovers that his life has been taken away from him. His wife doesn't recognize him, and another man has assumed his identity. With no help from the local authorities and two assassins suddenly chasing him, Harris goes on the run, looking to uncover the truth.

While trying to stay alive and pacing the streets for answers, Harris finds an unlikely partner in Gina (Kruger), an illegal immigrant and the taxi driver who saved his life in the wreck. Their relationship gives the film a sudden, and much needed, change ... 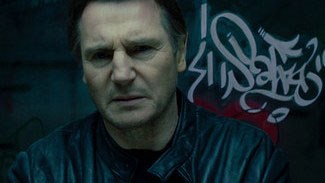