Green Lantern is a superhero movie that is very much for comic-book geeks. The title character comes to the screen with more mythological baggage than most: the Guardians of the Universe, a super-ancient race of philosopher-kings who live on the planet Oa; the Green Lantern Corps, with their power rings that run on the green energy of will-power; the dangerous contrary yellow energy of fear. Rather than try to minimize its comic-book silliness, Green Lantern embraces it, from the mostly straight-faced storytelling to the computer-augmented hyper-reality of the production design, which looks more comic-booky than any superhero movie I can think of, including this spring's Thor.

If only the filmmakers had put as much creative energy into the character of Hal Jordan as they did into his lovingly rendered CGI-enhanced suit, which pulses and glows as it hugs every bulge and swell on Ryan Reynolds' impressively sculpted torso. Impressed with the popular success of Iron Man, they've turned their hero into the big-screen Tony Stark's screw-up kid brother, an irresponsible, wisecracking, self-destructive womanizer with absent-daddy issues who flies military planes instead of running a military contracting firm.

Counting Thor, that's three recent comic-book bad-boy heroes who need to grow up and learn responsibility. Of the three, only Iron Man's flawed hero is persuasively humbled, hits rock bottom, is forced to face the consequences of his irresponsible ways and fundamentally reexamine his priorities. When Hal encounters a dying alien warrior who entrusts him with an awesome power ring, he does ask some uncomfortable questions about himself. As with Thor, though, there's no moment of truth like Tony's experience in that terrorist ... 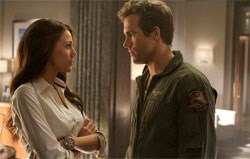