The Autobots and Decepticons lay waste to Chicago and revive the franchise.
Lisa Ann Cockrel|June 29, 2011
Our Rating

Transformers 2 was one of the worst reviewed movies of 2009 (so bad some critics are taking a pass on Transformers 3 altogether), but also one of the top grossing movies not just in that year, but in history, setting a handful of box office records. Clearly, an action movie doesn't always need a cogent plot to get some, well, action. But! For those moviegoers who like a little sense to go along with the spectacle, Transformers 3: Dark of the Moon is a rollicking recovery for the series, a trilogy best enjoyed as a kind of live-action cartoon for adults.

Presented in 3-D, the special effects are more conventional in the first few minutes of the movie as the 1960s space race is recast as a reaction to alien contact. Optimus Prime provides narration (sounding like a laconic John Facenda), describing the civil war between the freedom-loving Autobots and the tyrannical Decepticons that led Sentinel Prime, then-leader of the Autobots, to escape his home planet on a secret mission in the hopes of changing the tide of the war. Sentinel Prime's crash on the moon extinguishes all hope for the beleaguered Autobots and they lose their struggle.

Years later we find that a small band of Bots, now led by Optimus Prime, has taken refuge on Earth, living among humans as allies and guardians. But the discovery of the alien wreck on the moon and the machinations of re-emerged Decepticons (led by Megatron) threaten to bring the alien civil war to a new planet.

Meanwhile, Sam Witwicky (Shia LaBeouf ) is trying to find a job. Our erstwhile hero, a recent Ivy League college graduate and savior of the world twice over, is having a rough time on the job market. Not that you'd know it from the material facts of his life—a posh loft apartment and ... 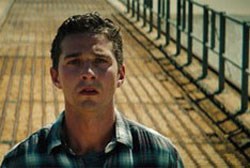