Reinvents a familiar cast of characters in what might be the standout action film of the summer.
Steven D. Greydanus|June 3, 2011
Our Rating

A dozen years ago super-hero movies seemed to be dead. Superman and Batman had each run four films, in both cases driving their franchises into the ground and exhausting whatever inspiration and goodwill they started out with. Stan Lee had been in Hollywood for the better part of two decades trying to get a movie made, any movie—Spider-Man, Daredevil, Captain America, you name it.

Then out of nowhere came Bryan Singer's mutant ensemble movie X-Men (2000), and it changed everything. It revitalized the super-hero movie and launched the current age of comic-book adaptations that, far from flagging, is still picking up steam. Yet few of the ongoing avalanche of Marvel and DC productions have been on a par with Singer's sharp little film. The genre has become routine, and few entries offer any surprises.

Even prequels and reboots are becoming almost routine: Counting Mark Ruffalo in the upcoming Avengers film, there have been three different Bruce Banners in ten years, and other characters—including Spider-Man, Superman, and Daredevil—are being or may be rebooted. Then there was X-Men Origins: Wolverine, a tepid X-Men prequel partly set, like X-Men: First Class, in the later mid-20th century.

Yet, surprisingly, First Class, produced by Singer and directed by Matthew Vaughn (Kick-Ass) from a story co-written by Singer, isn't more business as usual. First Class does what few franchise films do today: It takes risks, offers surprises. Consider Thor and the latest Pirates of the Caribbean: both competently pleasant films, and short enough not to wear out their welcome, but not a surprise between the two of them. First Class is comparatively long, but it feels satisfyingly complete rather than overstuffed. By the time ... 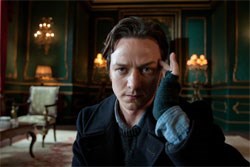