A twisty courtroom drama is energized by Matthew McConaughey and a conflict between innocence and evil.
Todd Hertz|March 18, 2011
Our Rating

Whenever a book is adapted into a film, there are undoubtedly things lost in translation. In the case of author Michael Connelly's courtroom drama, The Lincoln Lawyer, one of those things for me is quirky: Why is this story defined by the car the protagonist drives?

I assume the book expounds on how defense attorney Mick Haller's habit of working out of his Lincoln Town Car defines him. But, in the movie, it comes off as a very random hook. Sure, Haller does drive around (or gets driven around) a lot but, I mean, more than most movies? It's like calling a James Bond movie The Aston Martin Spy.

Still, there may be method behind the title and the film's car-heavy summaries, like "A lawyer conducts business from the back of his Lincoln Town Car while representing a high-profile client in Beverly Hills." Saying much more wades into spoiler risk due to a quick-moving, winding mystery with legitimate surprises.

Haller (Matthew McConaughey, in a return to his confident rogue mode of A Time to Kill) relishes his job of upholding his half of the justice system: defending those who no one else will—and who can pay for it. He makes deals, pays bribes, engineers con jobs, or does whatever it takes to ensure the most favorable result for his clients. The movie focuses on two cases: The first, an old case, where he got life in prison for a man instead of the death penalty. The second, a new case involving a rich young playboy (Ryan Phillippe) charged with attempted rape.

Facing the facts of both cases leads Haller to the fulfillment of a lifelong fear—representing someone truly innocent—and the emergence of a new fear. "You know what I used to be afraid of?" Haller says. "That I wouldn't recognize innocence. Not guilty or ... 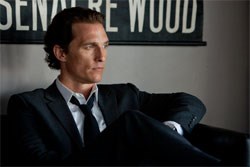