Fraser Heston on his dad's greatest films, including 'Ten Commandments' and 'Ben-Hur', and his father's commitment to family and faith.
Mark Moring|March 31, 2011

As two of the late great Charlton Heston's biggest projects—The Ten Commandments and Charlton Heston Presents the Bible—re-release to Blu-ray and DVD this week, we caught up with his son, 56-year-old Fraser Heston, to talk about his dad's life and legacy.

Fraser, who was the baby Moses in The Ten Commandments, followed in his father's Hollywood footsteps in some ways—as a writer, director, and producer, but never as an actor. Fraser was executive producer on Charlton Heston Presents the Bible, a series of four videos, each about one hour long, featuring Heston in a cross between documentary and performance on one section of Scripture. All were recorded in the Holy Land.

The new, 55th anniversary edition of The Ten Commandments is being released in high definition for the first time. It comes in a massive six-disc Blu-ray/DVD combo gift set, as well as in two-disc Blu-ray and DVD versions.

In 1981, Fraser and his father formed Agamemnon Films, for which Fraser is now president and CEO. Father and son worked on several films together with Agamemnon, including the TV movies Treasure Island, Crucifer of Blood, and A Man for All Seasons.

The elder Heston died in 2008, at the age of 84 after 65 years of marriage to Lydia Clarke, who was at his side at his death. Fraser remembered his dad not only as a great actor, but a wonderful father and man of faith who loved his family.

So, you were the baby in The Ten Commandments.

Yeah. If I live long enough, I'll be the last surviving actor to work with Cecil B. DeMille!

Did your dad pulled any strings to make that happen?

The first telegram my mom got when I was born was from Cecil B. DeMille. It said, "Congratulations. He's got the part." I think they had already started production. ... 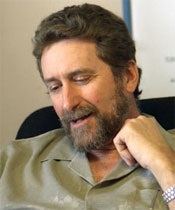