Superhero priests versus vampires? How bad could it be? Quite.
Steven D. Greydanus|May 16, 2011
Our Rating

Director Scott Charles Stewart seems to be making a career out of erasing Jesus from history, and celebrating supernatural heroes who rebel against God for the greater good … in apocalyptic action/horror movies starring Paul Bettany.

"Let's pretend the New Testament never happened" is how Stewart reportedly spun his 2010 apocalyptic thriller Legion to Christian actor Doug Jones. Legion is set in an alternate-reality version of the 21st century in which God sends the archangel Gabriel to destroy humanity, but Michael (Bettany) goes rogue to defend mankind against the forces of heaven. (Despite the "New Testament never happened" vibe, stray hints of Jesus' impact on history crop up here and there, as when a character refers to the "21st century," or even in the profane use of "Christ.")

Stewart's latest is Priest, a thoroughly repugnant Western/wuxia/sci-fi/horror/action mashup, based on a Korean graphic novel, that's replete with the language and iconography of the New Testament and the church age, particularly the Catholic church. Yet here it's like the New Testament happened without Jesus—without the Incarnation, without good news, without grace.

There is a "church"; there are "clergy"; there are "priests" who take vows of celibacy and obedience and are called "Father." There is ritual confession and mention of "absolution," with words taken directly from the Catholic rite and penance with prescribed recitations of Hail Marys and Our Fathers. There are echoes of the Gospels—but the gospel, the good news, appears to be entirely missing in this world.

There are crosses everywhere, and characters use the sign of the cross in prayer. The film ends with an overtly Eucharistic ritual, celebrated by Christopher ... 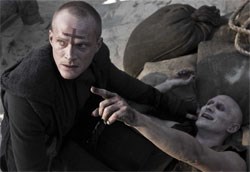