The comic book god of thunder hits the big screen with humor and heart.
Russ Breimeier| May 6, 2011
Our Rating

Many superheroes are masked avengers; in addition to their day jobs, they moonlight as crime-fighters. Thor is altogether different—the god of thunder championed in ancient Norse mythology. As envisioned in Marvel comics by Stan Lee and Jack Kirby back in the 1960s, "The Mighty Thor" doesn't put on a costume to be the hero. Like Superman, he really is the hero who occasionally dons civilian clothes to fit in.

Wait, why does a Norse god need to "fit in" anyway? I like mythology, but Thor always seemed a tad lame (on his own and as a member of The Avengers). He's essentially the Viking answer to Hercules—long blond hair, wielding a big hammer, tossing around "thee" and "thy," traveling on a rainbow bridge between "the nine realms." Maybe fans of Tolkein or Dungeons & Dragons were drawn to the fantasy elements, but I prefer story and character study. What's Thor's motivation for being a hero? What can a Norse god struggle with to make him interesting?

Those questions are answered more clearly now that Thor has made the mighty leap to the big screen. What could have been a stiff and overwrought production turns out to be one of the more well-rounded and enjoyable superhero movies in recent memory.

Most of the film's first 30 minutes focus on establishing Thor's mythology, narrated in part by Anthony Hopkins as King Odin, the "all-father" of Norse mythology. We're introduced to Thor (Chris Hemsworth) and his stepbrother Loki (Tom Hiddleston) as the former prepares to succeed Odin as king of Asgard. But the realm's sworn enemies, the Frost Giants, attempt to infiltrate the palace, causing Thor and his friends to launch a rash counterattack—against Odin's wishes. 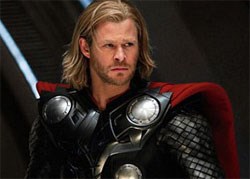