So doctors told the actor after years of abusing alcohol. He chose the former.
Ashley Moore|April 12, 2012

After a season of abusing booze and steroids, Brian Presley had a choice: Clean up. Or die.

God has a way of getting your attention like that. And for Presley, who'd grown up a Christian and had the best of intentions when he took on Hollywood as a young, ambitious actor, hitting rock bottom might have been the only way he'd finally sit up and listen.

Funny how life imitates art, then, because Presley's new movie—Touchback, opening in about 50 theaters this week—is essentially his life story. Handsome, talented guy, with the world at his fingertips, starts making bad decisions, blows it all. Gets depressed, considers (and maybe attempts) suicide, then gets the divine wake-up call. For the real-life Presley, it's the story of an actor and the CEO of an indie production company, Freedom Films. For his character in Touchback, it's a football star. Same guy, different uniforms.

Presley, now sober for a year and a half, considers himself still "in recovery," but says his relationship with God and his family have never been better. We talked to him about the new movie, produced by his own and his up-and-down-and-up-again journey.

Touchback is kind of biographical for you, right?

Yes. I grew up in church and was very involved in Fellowship of Christian Athletes. When I got to Hollywood, I started my [production] company after being on a TV show, and I felt called to make movies like Touchback that reached a family audience. Eventually I lost sight of what God had called me to do and began to pick films that I thought were good business deals, but not the films I wanted my mom and grammy to go watch. Well, we had a big film coming out, and we had the unimaginable happen: the studio decided not to release the movie, and we ... 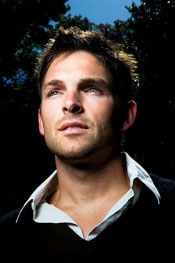