Drama seeks to tell a story of redemption, but it collapses under sentimentality and cliché.
Josh Hurst|June 29, 2012
Our Rating

People Like Us is a movie about some pretty lousy circumstances that ultimately produce something of real beauty and value. The movie begins with a death—that much we learned from the trailer. The man who dies leaves what seems, at first, to be a rotten legacy, a family that remembers him only for his abandoning them, and for the perpetual heartaches and loneliness he caused them all. As the full story comes into view, however, we see that even from the man's failings, there arise some signs of what we can only call grace.

In some ways, the movie proves its own point. As a film, it is not exactly gracefully (or graciously) made. It's blessed with a decent story and some fine actors, but the filmmakers never trust in those elements to carry the weight of the movie; there are plenty of instances where the thing all but sinks into sentimentality and over-explanation. In spite of its flawed delivery, however, the story can't help but bear witness to important truths—namely, that beauty really can come from ugly things.

The man who dies is a rock-and-roll producer named Jerry Harper, and it becomes clear early on that he cared more about the music than he did his family. He left behind a son, Sam (Chris Pine, Star Trek), who hasn't come to visit in years, who feels like he was never good enough for his old man, who believes Jerry did everything possible to force his son out of his life. And then there's the grieving widow, Lillian (Michelle Pfieffer), exhausted from years of trying to hold her fraying family together, and humiliated that her own son didn't show up for his father's funeral.

It's a family in tatters, but Sam makes a discovery that seems at first like it might drive them all even further apart. A week before ... 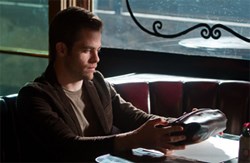