The series finale ends on a modest high note by delivering exactly what its fans want.
Review by Kenneth R. Morefield|November 15, 2012
Our Rating

About an hour into this fifth and final film of The Twilight Saga, director Bill Condon, screenwriter Melissa Rosenberg, and (most importantly) producer Stephanie Meyer have an epiphany that is about three and a half movies overdue. There are no more undecided voters. There are no more converts to be won. They could make another five movies and those who scorn the series and ridicule its fans will line up to scorn and ridicule each successive iteration. Faced with that realization they do the only sensible thing they can do; they stop trying to expand the franchise's circle of fans and start playing to the base they already have.

Giving the base what it wants means, among other things, a more active and participatory Bella. Kristen Stewart may or may not be the most accomplished of the three lead actors—I certainly think she is—but Bella is unquestionably the most interesting of the principle characters simply by virtue of being the only one who is not static. Where Part I of Breaking Dawn's 2-part finale relegated Bella to sitting on a couch and being pregnant, Part II opens with Bella unleashed. She is in many ways as powerful as Edward, she has powers that are indispensable in a final battle with the Volturi (a coven of vampires out to destroy the Cullens), and she is acting as mother to protect her newborn child.

Playing to the base also means remembering, a bit late but not quite too late, that Twilight is supposed to be, first and foremost, a love story. Breaking Dawn—Part 2 manages to have its cake and eat it at the same time by deviating from the book in order to include a big, CGI battle scene but managing to do it in such a way so that the battle is neither ... 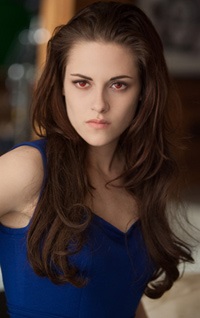