Vince Gilligan is from the South, say profiles of the Breaking Bad creator. He cares about morality; he believes in karma and hell; he is "TV's first red-state auteur" (from a 2011 New York Times piece).

"I find atheism just as hard to get my head around as fundamental Christianity," says a Gilligan quote from the same article. "Because if there is no such thing as cosmic justice, what's the point of being good?" In the eyes of his magazine-ordained biographers, Gilligan is not your typical tree-hugging pansy who wants everyone to have a happy ending. What these articles hope to prove is something about the nature of the show itself—but what the quotes actually show is that Gilligan isn't going for escape, but replication: mimesis rather than catharsis, that sort of thing.

In short: what we see on Breaking Bad is the way Gilligan thinks life works, or at least how it should work. And because of that, Breaking Bad is perhaps the most important thing on television right now.

For the uninitiated, here's the show's setup: Walter White is a poor and ridiculously overqualified high-school chemistry teacher with a palsied son and a surprise baby on the way. Then, he is diagnosed with lung cancer. Teaming up with his old student Jesse Pinkman, Walt cooks methamphetamine in an RV meth lab, in the hopes of saving up enough money to provide for his family before he dies.

But Walt doesn't die of cancer. His treatments seem to cure it, or at least put it in a remission deep enough to make us viewers forget ... 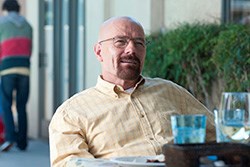