Celine and Jesse are white-knuckling the transition from young lovers to middle-aged couple in a serious but depressing examination of modern views about love and marriage.
Kenneth R. Morefield|June 12, 2013
Image: Sony Pictures Classics
Our Rating

Warning: Readers who haven't seen Before Sunrise, Before Sunset, or Before Midnight will encounter plot spoilers below.

"We know that we are going to break up eventually."

So says a young woman in the middle of her first great romantic attachment. The context is a dinner with cross-generational acquaintances at a villa in Greece. Three couples of varying ages are discussing friendship, companionship, commitment, sex—all the things that pass for or indicate love in the modern world—and they all seemingly agree on one thing: nothing relational in this world is permanent. Or if they don't agree, nobody is willing to fly publicly in the face of what has graduated from conventional wisdom to accepted fact.

Men and women want to love and be loved. They want it desperately enough that they must and will keep pairing off, even as they loudly and persistently declare that love's attainment is at best a random, lucky draw, and at worst—and most probably—a fairy tale.

I have always thought it significant that when Celine (Delpy) and Jesse (Hawke) met as strangers on a train eighteen years ago (in Before Sunrise), the reason they first spoke with one another was in shared disgust at a publicly bickering (apparently) married couple. There follows an awkward, recycled joke about how married couples lose the ability to hear the pitch in which the opposite gendered partner speaks ("nature's way of allowing couples to grow old without killing each other"). Jesse later shares that his parents once said they stayed together only for the sake of the kids. 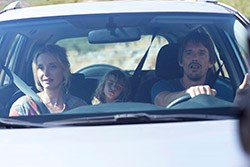