A pirate movie that's definitely not a swashbuckler - but does explore important global disparities and is heartstopping, too.
Brett McCracken|October 10, 2013
Image: Jasin Boland / Columbia Pictures
Our Rating

The final fifteen minutes of Paul Greengrass's Captain Phillips are among the most intense I have seen in any movie in years (particularly the final scene). Certainly, the whole 134 minutes—though it feels like 90 minutes or less—is intense. But its climax and catharsis are breathtaking. It left me feeling shaken, inspired, grieved, and shell shocked, with a distinct sense of "what just happened?!"

And that's an all-too-rare feeling in movies today.

I felt the same way seven years ago when I sat in a theater watching another film by Paul Greengrass that ended with a breathless bang and a similar, albeit more tragic, climactic catharsis: United 93. That film, one of the decade's best, left me so shaken I could hardly move from my seat when the credits began to roll.

The final moments of Captain Phillips include a career-best acting moment from Tom Hanks, but its final scene also reminded me of what Paul Schrader, in Transcendental Style in Film, calls stasis: the moment at the end of the film (usually the last shot) when the "abundant," loud, and chaotic give way to "sparse," quiet, and contemplative finality. To put it another way: Captain Phillips is hardly Ozu in form or in content. But the way it ends certainly leads the viewer to place of stasis that reminds one of the Japanese director's work: "a frozen view of life," notes Schrader, "which does not resolve the disparity but transcends it."

The amazing thing is that Captain Phillips, like United 93, is based on a true story that most of the audience knows. That a story with a known ending can be so gripping—even sublime—is a testament both to the filmmakers' talents ... 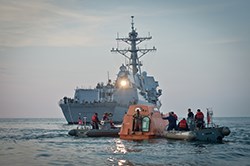