James Gray's The Immigrant is the sort of film that would be more at home on the giant screens of America's lavish movie palaces, circa 1928—The Strand in New York or Grauman's Chinese in L.A., perhaps—than on the art house screens of 2014. It's a period piece that is uncommonly sincere, straightforward, and melodramatic (and not in a satirical way). 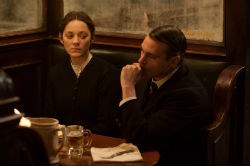 Joaquin Phoenix and Marion Cotillard in 'The Immigrant'

Some will find the throwback style jarring, perhaps even heavy-handed, and dismiss it on this point. But that would be a shame, because The Immigrant is more than meets the eye.

Some might compare The Immigrant to The Artist, the 2011 Oscar winner that paid cheerful homage to the silent film era. And Gray's film, set in 1921 New York, is the sort of thing that could have worked as a silent film directed by someone like King Vidor (The Crowd). The plot is fairly simple, the actors exaggerate facial emotion and physical action (running, fighting, cowering) and operatic orchestral music (by composer Chris Spelman) is plentiful. The grainy sepia tones of cinematographer Darius Khondji amplify the film's retro feel.

Yet Gray (Two Lovers, We Own the Night) has more in mind than mere stylistic homage. Unlike The Artist or Baz Lurhmann's The Great Gatsby—1920s period films primarily about celebrating the aesthetics of cinematic antiquity and postmodernity, respectively—The Immigrant is actually interested in investigating the place and time in which it is set. It's the sort of non-cynical period piece more interested in history itself than in using history to subvert a genre (Unforgiven, Far From Heaven) or to revel in postmodern pastiche (Marie Antoinette, Django Unchained, The Great Gatsby).

Among other things the film explores about 1920s America is the tension between group identity/family loyalty (so strong among the newly arrived immigrant populations) and the individualistic orientation of "self-made" American capitalism. At various times we see how family members are separated or pit against each other, group ties weakened, and "family" redefined in the context of business pursuits (one thinks of the instant-classic Burger Chef scene with Don, Peggy, and Pete in Mad Men's seventh season).

The film also captures the very American mingling of the sacred and profane, the intersecting strains of God and mammon. This tension comes to an explosive head in the 1920s as America's religious impulse, already beleaguered by the onset of modernity, collides messily with the excesses of consumerism and urbanism—and their attendant pleasures (vaudeville, moving pictures, flappers, speakeasies, and so on). Indeed, The Immigrant complicates the traditional Hollywood notion of the "American dream" by putting it in the midst of these various unresolved tensions. 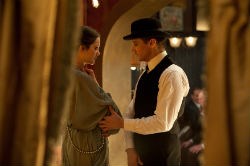 Marion Cotillard and Jeremy Renner in 'The Immigrant'

The film follows a Polish Catholic immigrant named Ewa (Marion Cotillard) who arrives on Ellis Island in 1921 with her sister Magda (Angela Sarafyan) in search of a better life. After Magda is quarantined with tuberculosis and both are threatened with immediate deportation, Ewa finds herself in a vulnerable position. Alone and broke in a foreign land, needing a chunk of money to pay for Magda's release (bribery is a way of life among certain immigration officials, apparently), the beautiful Ewa is taken in by a pimp named Bruno (Joaquin Phoenix), who sees an opportunity. Ewa's American dream quickly becomes a nightmare as she finds herself working for Bruno, alongside his other girls, in the bordellos, burlesque halls, and tawdry taverns of the Lower East Side.

Whether or not Ewa truly has no other option is one of the film's provocative and open questions. Played with great passion and complexity by Marion Cotillard, Ewa is a sympathetic protagonist who appears almost saintly in her innocence. She's a woman of deep faith, praying frequently, gazing longingly at the cross, attending local mass, and even confessing to a priest as she wrestles with the tension between what she must do to survive and the profound guilt she accrues doing it.

In the confessional she wonders whether she's bound for hell. The priest tells her, "you must have faith in your own salvation," but also tells her she must leave behind a lifestyle of sin.

A "way out" is presented in the form of a compassionate magician named Emil (Jeremy Renner), Bruno's cousin, rival and seeming opposite on the villain-hero spectrum. When Ewa first meets Emil he is onstage performing as "Orlando the Magician," stunning the crowd through Houdini-esque illusions: disappearing from a bullet-strewn coffin (empty tomb!) and levitating in a cruciform pose (the resurrection!).

If Emil's savior overtones aren't clear enough, he tells the crowd: "Don't give up faith and don't lose hope." He catches Ewa's eye and hands her a white rose, symbol of new beginnings. But is Emil really the salvation Ewa needs?

As the film progresses it becomes clear that the "two divergent paths" presented as futures for Ewa (one with Bruno in his sordid but lucrative business; the other with Emil, starting a new life in, of course, California) are artificially simplistic. Where is Ewa's agency in all of this? Doesn't she have the option of ditching both of these men and finding a way on her own? The film is careful to not anachronistically impose contemporary gender politics into the world of the film, but Ewa's arc can nevertheless be read through a feminist lens. 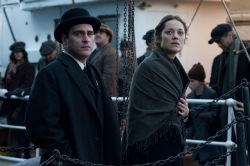 Joaquin Phoenix and Marion Cotillard in 'The Immigrant'

When Bruno gets arrested and briefly jailed midway through the film, one of his other prostitutes laments to Ewa that "we are nothing without him." Ewa emphatically replies, "I am not nothing." Even the most depraved and lowly creatures have dignity, Ewa's faith leads her to believe, and she sees this in people even when they themselves do not. When Bruno is at his lowest moment and says "I'm nothing," Ewa repeats her earlier comment, but this time to him: "You are not nothing."

Both Emil and (in the film's closing moments) Bruno appear at times to be Christ figures of sorts. Yet it is Ewa herself who ultimately presents the film's best picture of Christ-like love and sacrifice. Everything she does in the film is not for herself, but for the sake of her sister. She lays aside her innocence and opens herself to the profoundest humiliation, so as to liberate her imprisoned sister. It's an imperfect parallel to be sure, but Ewa's journey reminds me a bit of what Paul says of Christ in Galatians 5:21: "God made him who had no sin to be sin for us."

Christ, of course, went further. Unlike Ewa, who grasps on to her belief that "I am not nothing," Christ relinquished all claim to pride and status (Philippians 2:6-8) and became "nothing" on a cross, for our sake. God vindicated Christ's humility by exalting him to the highest place (Philippians 2:9-11).

Is Ewa's redemption at the conclusion of The Immigrant ("redemption" being the optimistic reading of an ambiguous ending) a result of God responding to her self-sacrificial love and humiliation? Or is it simply a result of her persistence and will to survive? Are the positive turns in the third act gifts from God or the results of Ewa's "I am not nothing" endurance and strength?

The questions themselves, torn as they are between "God-given" and "self-made," are as American as they get.

The Immigrant seeks to present a realistic depiction of life inside the seedy brothels, bars and clubs of New York's Lower East Side in the 1920s. It includes a few brief scenes where female prostitutes are topless, including on stage being paraded around in a degrading manner for a rowdy, catcalling audience. The film suggests, but never actually shows sex, displaying an intentional and refreshing restraint given the subject matter. Where other, more contemporary-minded films might amp up the sleaze quotient or show explicit sex to emphasize the degradation of a character or context, The Immigrant fades to black. The film contains a bit of language and some violence as well, including a stabbing and a beating. One scene includes a litany of ethnic slurs in the context of showgirls "from around the world" on a vaudeville stage. The film has definite rough edges (as it must) but is surprisingly demure and tasteful, especially in light of what its prostitution-centric narrative might have warranted.