The wages of sin is death, but sometimes that's not what you were expecting.
Alissa Wilkinson|May 28, 2014
Image: Cinedigm
Dakota Fanning, Jesse Eisenberg, and Peter Sarsgaard in 'Night Moves'
Our Rating

When Kelly Reichardt makes a film with a bomb in it, you can count on one thing: the bomb is not the point. 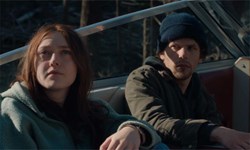 Reichardt is obsessed with our essential small-ness as humans in a big world. In her movies, every person is alone. We are discrete units who try to forge bonds to overcome the terror of knowing we are tiny against the backdrop of the universe—but we often wind up hurting ourselves and nature in the process.

Each of her films zooms in on people adrift in the big world as they try to grab hold of something, but usually slip and fall. There's the shooting and failure to launch in River of Grass. Old Joy's rickety attempt at friendship renewal plays against both the beautiful wild and the constant anti-war talk radio backdrop. Wendy & Lucy's disaffected, down-on-her-luck protagonist gets a small moment of grace from a kind stranger, but is mostly alone, for reasons we don't know. And the settlers in Meek's Cutoff battle against starvation, exposure, and death, but also against each other and their fear of those they encounter.

Night Moves is the film with the bomb, and also with Jesse Eisenberg, Dakota Fanning, and Peter Sarsgaard as a trio of radical environmental activists who plan to blow up a dam in Oregon to "make people think." Josh (Eisenberg) lives and works on a mostly-off-the-grid organic farm nearby; Dena (Fanning) is a rich kid who left college and works at a spa, but bankrolls their operations; Harmon (Sarsgaard) is a little eccentric and lives in a trailer a long way from anywhere. They buy a boat named "Night Moves" (presumably for the 1975 Gene Hackman film) and set their plan in motion.

The script—which Reichardt wrote with her writing partner Jon Raymond—is, most properly, an intellectual thriller: a story of three people who do a bad thing and must deal with the consequences and their consciences. The fallout is swift, severe, and life-altering. (You could see this film working well as the origin story for someone like Michelle Williams' character in Wendy & Lucy.)

But all of Reichardt's movies play a bit like we're seeing the action happen from behind glass—which in a sense I suppose we are. As a viewer, you're removed from the action, watching it happen, not fully comprehending what's going on until it's happened. Everything bubbles just beneath the surface. This makes sense: Reichardt is separating us (as isolated viewers) from her characters. The best we can ever do is watch them for a while, and then go back to our own lives. Connection is impossible or, at best, fleeting.

That said, for what most of us would term a "slow" movie, Night Moves trots along at a decent clip. It's certainly more plot-driven than Meek's Cutoff, but its vistas of the Pacific Northwest are just as beautiful, worth the big-screen ticket. And the performances are understated and beautiful—Dakota Fanning in particular, who's got everything she needs to blossom into the next Elizabeth Olson. A scene where she tries to buy—of all things—fertilizer could have been predictable and obvious, but she makes it gripping and suspenseful.

Admittedly, the environmental message of Night Moves can feel a bit heavy-handed, which threatens to derail the film for the casual viewer. Message-driven, polemical films rarely succeed as works of art, too. But hold up before jerking your knees: this is not an environmentalist movie. Or if it is, that's a tertiary theme at best. The crux comes after the dam has been blown up, and the unintended consequences have snuck in. "There's nothing natural about this," Dena says to Josh.

In a sense, she's right. What's happened hasn't helped advance their cause. Rather, it's set it back—not just because of what happens afterward, but because the three of them are wracked with guilt, Dena breaking out in hives, Josh (already seemingly socially handicapped) rendered unable to operate normally. They think they're brave, but they discover it's just bravado.

On the other hand, what happens to them is exactly natural, and that's the point of the bomb, if there is one. Night Moves calls us (inadvertently or not) to reconsider our definition of what's "natural." Certainly, some of the ways we've failed to care for the planet as we were charged back at the beginning have had dire consequences. Let's not ignore that.

But there's another way you can take this idea—1 Corinthians 2:14 gives us something to chew on: "The natural person does not accept the things of the Spirit of God, for they are folly to him, and he is not able to understand them because they are spiritually discerned." There are consequences to our actions, and often they're unintended; we should be very careful before we make choices to destroy cultural artifacts (like dams, for instance, but a whole lot more, like traditions and artwork and books and ideas), believing ourselves to be saviors of mankind.

The wrong things we do can leave us dislocated, lost in a big world, all our connections dissolved. The wages of sin are death—and sometimes that means more than we expect.

There is some bad language, including f-bombs. We hear two characters (presumably) having sex, but from outside a trailer. There's a little beer drinking. Nobody gets hurt onscreen, but there's several deaths, one of which may be disturbing. In a scene at the beginning, we see a number of fully-nude women at the spa—it's non-sexual, but not brief.

Alissa Wilkinson is chief film critic at Christianity Today and assistant professor of English and humanities at The King's College in New York City. She tweets @alissamarie.