Why are we supposed to hate this movie?
Kenneth R. Morefield|November 21, 2014
Image: Lionsgate
Jennifer Lawrence in 'The Hunger Games: Mockingjay - Part 1'
Our Rating

Note: There are, of course, spoilers here for the previous two films in the franchise.

When last we left Katniss Everdeen (Lawrence), she had just been rescued from her second Hunger Games arena and what had looked like her inevitable death. We'd discovered that an underground resistance movement is rebelling against President Snow and his forces in the capital of Panem. The rebels pulled Katniss out of the arena and flew her to safety.

As Mockingjay – Part I opens, we learn the fallout of that rescue. Katniss’s fellow tribute, Peeta (Hutcherson) has been left behind and is now either working with President Snow (Sutherland) or being forced into making propaganda videos with Casear Flickerman (Tucci). Plutarch Heavensbee (Hoffman) is convinced that Katniss can be a symbol—the Mockingjay—around which the rebelling districts can unite. But rebel President Coin (Moore) find Katniss’s reluctance suspicious, and is (rightfully) contemptuous of her “demands” on the rebels who want her to participate.

The bulk of Part I revolves around Katniss eventually agreeing to play the part of the Mockingjay—and the lead up to all-out war between Snow’s forces and the growing rebellion.

Would it surprise you to learn that Suzanne Collins’ Hunger Games trilogy has been one of the ten most frequently challenged or banned books in schools and libraries for three of the last four years? The American Library Association tracks such challenges, which it defines as “a formal, written complaint, filed with a library or school requesting that materials be removed because of content or appropriateness.”

I’d get indifference. But I don’t get the outright ... 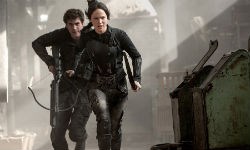