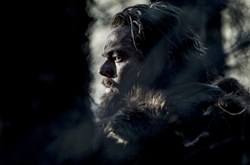 One of the memorable (and most talked about) scenes in The Revenant is an epic fight between Leonardo DiCaprio and a grizzly bear. The bloody brawl occurs early in the film and is the plot’s inciting incident. Gravely injured by the bear, 1820s frontiersman Hugh Glass (DiCaprio) is left for dead by his fellow hunters/fur-traders and must survive in the wilderness in the dead of winter.

As if it wasn’t already hard enough to survive the Pawnee tomahawks and arrows, subzero temperatures, blizzards, dehydration, and treacherous men within his own group (most notably Tom Hardy’s villainous character Fitzgerald), Glass must do it all having been maimed, mauled, and flayed by a bear.

But the death match with the bear is also thematically significant, as it sets up the film’s existential grappling with the meaning of humankind as unique (or not) among the creatures of the earth. What makes a man different from a bear? In their brutal fight, Glass and grizzly are evenly matched. Their fight is mirrored later in the film by a human-on-human blood bout that is no less savage and similarly choreographed.

Throughout the film, as he survives alone in the wilderness, Glass is purposely made to look and act like a bear. He wraps himself in bear fur as a coat and crawls along the ground. He grabs fish directly from a mountain river and takes bites out of them. He devours flesh directly from the carcass of a buffalo. His most elemental instinct is to protect his young.

Director Alejandro González Iñárritu, fresh off an Academy Award for a film where a man has fantasies of being bird-like (Birdman), this time explores a story that may as well be called Bearman. (Read our exclusive interview with Iñárritu.)

As it is, the actual title (The Revenant) refers to a mythological, ghostly entity who returns from the dead and terrorizes the living, often with a motive of revenge. And herein lies the difference between Glass and the grizzly: revenge as a motivation; a desire for justice. A grizzly will fight to the death to protect its cubs from harm, but if those cubs are killed, the grizzly will not seek revenge. It has no concept or need for moral justice; it simply must survive.

Tom Hardy in 'The Revenant'

Humans are different. We are as wired to desire justice as we are to survive. But is justice ours to be accomplished in the same way survival is? Or is revenge “in God’s hands”? This is a question Iñárritu wants to explore.

Certainly both motivations—revenge and survival—are salient themes in our world today. Whether terrorists avenging western military intervention, western militaries avenging terrorist attacks, or lone gunmen avenging some cause or another by spraying bullets into a crowd, bloodshed is everywhere on account of man’s desire for justice. We see this in many recent films, whether this year’s Mad Max: Fury Road and Sicario, or in the revenge fantasies of Quentin Tarantino’s ouerve. In their pursuit and defeat of evil, these films offer audiences catharsis, conflicted though it may feel.

The bare necessity of survival is also everywhere in our world today. We see it in the refugees crowding on boats in the Mediterranean, in the growing homeless populations of America’s urban centers, in the many corners of the world where finding clean water and food is a daily struggle.

I would argue that the theme of survival has been one of the dominant themes in movies and television in the last few decades. Whether the reality TV escapades of Survivor or “Bear” Grylls, the post-apocalyptic survival narratives of The Walking Dead and ilk, or economic survival films like Two Days, One Night or 99 Homes, there is a clear channeling of survival anxiety in the orbits of contemporary pop culture.

Why is this? Perhaps the real possibility that a terrorist attack or mass shooting could happen anywhere, at anytime, has us compelled by protagonists who spring into action and do what is necessary to survive. Paul Greengrass’ 9/11 film United 93 is a good example of this: a real story of fight-to-the-death survival instincts that leaves the viewer wondering how capable they would be if faced with a similarly grave threat.

One sub-genre of the survival narrative that has been ubiquitous in recent years is the one-man-show cinematic display of resourceful, masculine survivalism. Films like Cast Away (Tom Hanks), All Is Lost (Robert Redford), Buried Alive (Ryan Reynolds), 127 Hours (James Franco), or this year’s The Martian (Matt Damon) all feature a solitary man in an against-all-odds survival situation, forced to go to extreme lengths (even sawing off one’s own arm) to avoid death.

The trend is likely a corollary to the “vintage masculinity” aesthetic of recent years, which has seen the rising popularity of beards, bacon, “lumbersexual” fashion and grandpa accoutrements (pipes, straight razors, shuffleboard). In the wake of feminism and the rise of egalitarian culture, men are naturally drawn to manifestations of re-asserted masculinity. That’s one reason these films are increasingly common, and The Revenant is one of its most vivid examples yet.

Based on Michael Punke’s 2002 novel of the same name (inspired by a true story), The Revenant is the epitome of primal, visceral cinema. Shot in long, magically uninterrupted takes with the disoriented perspective of a man in the wild who must constantly scan all horizons for threats, the film succeeds in putting the viewer right there in the icy wilderness. Emmanuel Lubezki’s characteristically gorgeous cinematography is as charged with natural beauty as it is with existential dread. We feel the warm steam from a hot rock in the midst of a blizzard. We shiver alongside DiCaprio as he swims in cold rivers and crawls on snowy forest floors. Our bodies shake at the thundering bass of a buffalo stampede; they tense up at the sound of an arrow flying right by our heads. It is the immediacy of cinematic sight and sound that gives us the visceral experience of identifying with the survival plight of Glass. 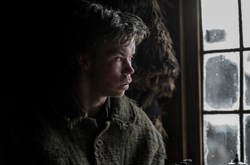 Will Poulter in 'The Revenant'

And what a plight it is. The bearfight is only the tip of the iceberg. Over the course of the film we endure all manner of wince-worthy survival tactics: burning wounds closed with gunpowder, riding a horse off a cliff to escape Indians, sleeping naked in a still-warm animal carcas or (literally) clawing his way out of the grave. If there is anything to criticize in The Revenant it might be that it is unrelenting, over-the-top and humorless. For 156 minutes, there is no relief. But that is kind of the point.

At a time when the world is increasingly brutal, when beheadings and inhumane torture are fixtures on YouTube, films like The Revenant ask the valid question of what makes humans distinguishible from beasts. Liam Neeson’s wolf-centric The Grey and this year’s Beasts of No Nation ponder similar things.

The Revenant’s frighteningly lawless 19th century western frontier is a suitable proxy for the tenuous climate of our world today. Vestiges of God and religion’s moral grounding are there, in ruins and faint echoes. We see the visage of Jesus on a crumbling wall inside the ruins of a frontier church. One character tells a story of “finding God” in a tree, only to discover it was just a squirrel (which he promptly shot and ate).

God may be distant in The Revenant, in a world where the necessities of material survival hardly afford space for spiritual contemplation. But the Almighty is there. In the betrayer’s guilty conscience and the betrayed’s longing for justice; in the tension between self-preservation and sacrificing for a friend; in the sublime beauty of raging rivers and ferocious avalanches… He is there.

This is a film about wilderness survival and fights with bears, people and nature, so it is naturally full of violence and disturbing imagery. There is battle violence, including implied scalping. There are bloody knife fights and arrows through people’s faces. There is bear-on-human violence, including gory aftermath shots of what the bear did to a man’s body. There is also violence toward animals, including a man eating straight from a buffalo’s carcass and another man cutting open a dead horse, removing its organs and using the steaming carcass as a warm place to sleep, naked (we don’t see any of the nudity). There is also a fair amount of language and one brief scene of rape (no nudity). The film is intentionally raw and over-the-top, so squeamish viewers and the faint of heart should think carefully about seeing it.

Brett McCracken is a Los Angeles-based writer and journalist, and author of the books Hipster Christianity: When Church and Cool Collide (Baker, 2010) and Gray Matters: Navigating the Space Between Legalism and Liberty (Baker, 2013). You can follow him @brettmccracken or at brettmccracken.com.