After over 250 appearances on screen, is there a point to telling yet another Sherlock Holmes story? Yes, there sure is.
Jessica Gibson|July 17, 2015
Image: Giles Keyte / Miramax
Ian McKellen in 'Mr. Holmes'
Our Rating

Critics love to point to the film industry’s love affair with remakes, reboots, and sequels to demonstrate how awful today’s movies are. They’re not entirely wrong; take a look at our reviews of Terminator Genisysand Pitch Perfect 2, for example.

Mr. Holmes isn’t a remake, per se, but it is the latest in the record-holding line of cinematic adaptations. At 254 appearances as of 2012, Sherlock Holmes is the most-portrayed onscreen character of all time. After that many iterations, becoming formulaic isn’t just a concern, it’s pretty much expected.

So what then is the point of another Sherlock Holmes movie? Haven’t we seen everything that can be done to this story, from superfluous steampunk fanservice—yes, I went there, A Game of Shadows—to almost forcibly relevant modernizations? (I feel obligated to note, however, that both the BBC’s Sherlock and CBS’s Elementary are fantastic and you should watch them.)

The answer is yes, we probably have seen every version of Sherlock Holmes we can. And we’ll undoubtedly see more, because ultimately the point of yet another Sherlock Holmes movie is to prove how much audiences can still love a good character paired with a good story. We don’t have to abandon all hope for remake movies yet.

Director Bill Condon does an excellent job balancing the familiar with the intriguing in Mr. Holmes. Ian McKellen plays Sherlock to perfection as exactly the type of old man we’d expect the detective to become: quick-witted, a bit cantankerous, slightly sentimental, and just as sharp as ever. He’s grown domesticated over his thirty years of retirement, spending his final years in the countryside, investigating ... 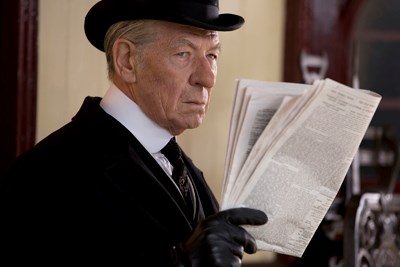