Just another sci-fi flick about a robot becoming sentient? Or a deeper look at the immortality of the soul?
Mark Moring|March 6, 2015
Image: Columbia Pictures
‘Chappie’
Our Rating

These things I know to be true:

I have a Maker. I have a body. I am a soul. My soul will live forever, but only because of what my Maker has done for me. There is both good and evil within me.

You may believe these things as well.

Apparently we’re no different from a robot named Chappie, who also holds these truths to be self-evident.

This particular bot is the title character in Chappie, the smart new sci-fi film from Neill Blomkamp, who co-wrote and directed the movie. Blomkamp has fast established himself as one of today’s sharpest creators of science fiction fare, right up there with Christopher Nolan. Blomkamp burst out of the gate with the brilliant District 9 (2009) before he had even turned 30. He stumbled a bit with 2013’s Elysium, a nice idea that even the director has admitted wasn’t executed very well.

But he’s back on track with Chappie, the latest in a long line of films about how artificial intelligence inevitably morphs into something far beyond what its Makers—er, programmers—intended, sometimes with a sinister turn, sometimes not.

Think 2001: A Space Odyssey, Short Circuit, I Robot, The Iron Giant, WarGames, The Matrix, and A.I. Artificial Intelligence. And in May, Avengers: Age of Ultron. Self-aware, sentient droids have been popping up in books and on the big screen for a long time, and will certainly keep doing so. It won’t be long till we see Ultron, a good bot gone bad, try to destroy the world.

Chappie is one of those movies where the synthetic protagonist can be both good and evil, depending on who’s pushing his buttons—literally and figuratively. 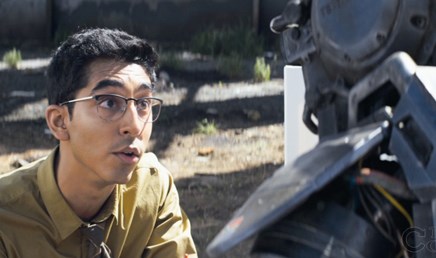