Home is more of a blip than an alert, more of a whisper than a bang. It's like an unimportant story that airs only once on a local cable channel, at, like, 2:50 in the afternoon. If you happen to catch it, that's fine. If you miss it, though, nothing of value was lost.

Which is too bad—Home marks another dud for Dreamworks, whose animation studio work between 2008 and 2011 was as close to a "Golden Age" as the studio is capable of having. Their willingness to take a chance on new independent properties left us with the Kung Fu Panda and its sequel, How To Train Your Dragon, the criminally underrated Megamind, and the against-all-odds-watchable Puss in Boots. Besides Dragon, none of these movies brushed up against the same kind of artistic ambition as your average Pixar offering, but they were at least mildly ambitious, entertaining, and occasionally moving.

Unfortunately, the same dry, rote movies whose failures forced Dreamworks to (temporarily, it seems) innovate are once again becoming their normal output. Whereas pre-2008 Dreamworks trafficked in capital-e Edge (Shrek and its sequels and Shark Tale stand out here), 2015 sees the studio opting for a lowest common denominator approach of a different kind. Before they targeted bottom-of-the-barrel humor; now they're pandering for as broad a possible base of acceptance as possible.

Home is a great example of why relentless palatability and artistic "safety" ends up being way more boring than pleasant. The movie concerns the alien Oh (Jim Parsons, the character named for the unenthusiastic sound others make at his arrival), a Boov in the process of fleeing his planet due to another genocidal alien race. In the Booves’ attempt ... 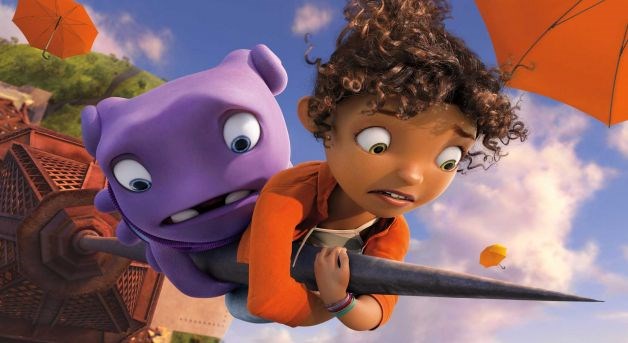