Kornel Mundruczó’s White God ("Fehér isten") is the sort of film critics love to overpraise: we know, deep down, that most anyone who takes the time and effort to see it will probably be predisposed to appreciate it. Plus, the increasing length of time between when foreign language films play on the festival circuit and when, if ever, they are made available for mass audiences, also means that barring some sort of Twitter or Letterboxd trolling, critics are shielded from pushback against elevated encomiums.

Critical grade inflation can have its down side, though. Increasingly, when I work my way around to a highly buzzed film that I missed on the festival circuit, I find myself thinking, “That was nice, but . . . ” Films I might have liked more if I’d approached them with modest expectations end up getting punished for not being great, transformative, or overwhelming.

White God is none of those things, but it’s not a poor movie. A genre-mashing tale that mixes elements of Planet of the Apes, Lassie Come Home, The Birds, The Great Escape, and Heart of Darkness, the film is brimming with interesting ideas and never far from a powerful image.

Thirteen year-old Lili and her dog Hagen are dropped off with her father so that her mom and stepdad can attend an academic conference. Dad doesn’t want to pay a fee to keep an unregistered pet in his apartment, so he forces Lili to choose: Hagen can be turned in to animal control, where he will most likely get put down, or he can be released on the street to fend for himself.

Lili chooses life—or at least the slim chance of it—over a humane death, and then she plays hooky from band practice to search for her ... 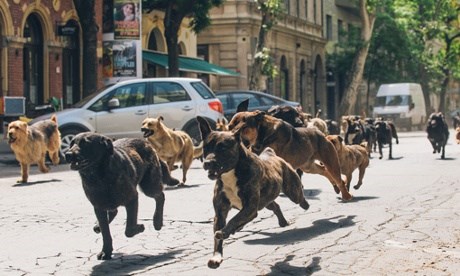