Grade-A scifi and a meditation on evil in the human heart, in one entertaining package.
Jessica Gibson|May 1, 2015
Image: Marvel Studios
'Avengers: Age of Ultron'
Our Rating

After the successful mission, Tony and Bruce run experiments on the scepter that could help with their latest global security project, a program called Ultron (James Spader). Underneath the requisite tecnobabble, the scientists’ goal is to transfer the scepter’s mysterious intelligence to Tony’s robotic weapons and form a dispensable army of Ultrons, robots with a moral code to achieve “peace in our time.”

In an unsupervised moment, something clicks in the program and Ultron emerges out of the absolute worst interpretation of Tony’s desire to protect the world. Ultron believes that to create peace, he has to stop evil everywhere he sees it, including the evil in humanity. Scared and violent as he realizes his mission, he destroys Tony’s other AI program, Jarvis, takes control of Tony’s robots, attacks the Avengers, and escapes to build an army for global genocide.

The rest of the film unfolds quickly; there’s a lot happening with a lot of people and it’s a lot to take in. Even though it runs for nearly two and a half hours, it could have used a little more padding between events to smooth the transitions.

That said, as he proved in the first movie (check out our 4-star review), Whedon’s directorial strengths are ideal for this type of sprawling epic. His stories are intensely character driven, with well-defined personalities and clever, compact dialogue that anchor the film on the team’s interactions.

The film could’ve unraveled into the “circus freak show” one of the villains dubs the ensemble, but Whedon somewhat miraculously juggles all these personalities by leveling the playing field. Nobody monologues at everybody else, everyone has input in each conversation, the lines have tangible quirks fitting each personality, and even the fast-paced combat banter is skillfully woven to never feel morbid or overpowering. In fact, it’s usually pretty funny. 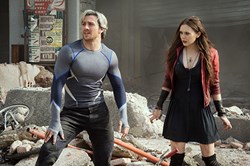 Aaron Taylor-Johnson and Elizabeth Olsen in ‘Avengers: Age of Ultron’

Whedon also gives characters who haven’t had stand-alone films chances to balance out their well-established counterparts. Clint Barton is the quiet star of the film, stepping into a nurturing role for his teammates. Natasha Romanoff gets some stellar backstory—still not enough to satisfy the craving for her own movie—but her budding romance with Bruce feels a little stilted. Whedon gets carried away in crafting character-focused moments and takes these two somewhere that doesn’t work.

The movie’s action sequences are spectacular without devolving into spectacle, because like everything else, they’re all about the people. When they’re not smashing robots, the Avengers focus on getting civilians to safety and moving their fights away from cities. This concern is a welcome change from superhero movies that wreak havoc without regard for collateral damage. Whedon always brings the focus back to the characters, making a subtle but necessary point about the Avengers films: these stories are about people, humans, and humanity’s collective fight against their own collective evil.

Though he may have started with a vendetta against the Avengers, Ultron soon develops a god complex and decides to pass judgment on all humanity. He strings his plans with Biblical references: “Whenever the universe settles,” he says, “God throws a stone at it.” As he sets up his stronghold: “On this rock I shall build my church.” The best way to rid the world of sin? “Ask Noah.”

These references aren’t casual epithets; they make an important point about what the Avengers are battling. He doesn’t want to acknowledge it, but Ultron is conspicuously human. He talks and jokes like a person, and at his inception, he has the naiveté and fear of a child. Like all human children, he has a sin nature; his first act as a “living” thing is essentially a murder (Cain and Abel parallel, anybody?). He was made by fallen people, and that fallenness becomes his identity and purpose.

If Ultron embodies collective human sin, the Avengers embody individual, personal sin and the struggle to do good despite being fallen. The heroes confront their own ambition, selfishness, arrogance, and fear; Tony owns up to Bruce, “We’re monsters, buddy.” They despair of their ability to fight the evil in themselves, much less the evil in Ultron. They recover their hope and purpose by affirming their faith in each other and relying on their strength as a team.

One of the film’s best moments occurs when Clint gives Wanda Maximoff that choice: stay trapped in fear, or fulfill her incredible potential: “If you step out that door,” he challenges her, “you’re an Avenger.” 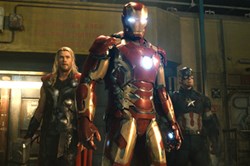 Each Avenger makes that choice in this movie. At some point they all face their own fallenness, and they don’t all conquer their fears. But they all still choose to fulfill their callings, to step up and fight, because that’s who they are. It’s what makes them most authentically Earth’s Mightiest Heroes: they fight the battles humanity never could, together.

And above all the movie tells its viewers to make the same mighty choice. It’s defending the significance of making the moral decision in spite of our own fallen states. It praises the beauty of having authentic relationships that build us up when we need it most. It affirms that the evil in the world exists and can be beaten (Chesterton would be proud). It’s a powerful defense of virtue and hope and faith, wrapped up appropriately in a superhero cape.

Age of Ultron isn’t a great science fiction film because it’s got the biggest explosions or the best CGI or the most characters. It’s a great science fiction film because it tackles huge ideas about humanity in nuanced, intellectual ways without sacrificing the elements that make it a fun movie. This film can’t be written off as the latest in the Marvel assembly line. It defies the expectations of its genre to be an incredible, engaging, significant, flat out fun work of art.

The very first word of dialogue is an expletive, to which another character warns, “Language!” The gag gets repeated at the character’s expense whenever an Avenger curses for the rest of the film; it’s very funny, but it does involve a few more scattered profanities. In the first half, several of the Avengers have some intense nightmares brought on by another character’s psychic powers. One nightmare shows the entire main cast (bloodlessly) dead or dying; one involves some implied intoxication and revelry; the last implies an execution and some frightening medical procedures. A character recalls being sterilized as a teenager; it’s not shown and there are no descriptive details, but in context it’s still a very weighty confession. As expected, there’s an abundance of sci-fi violence, mostly against robots, but it can still be pretty heavy. One character’s arm is cut off in a fight. In an admirable act of self-sacrifice, a character is killed in a hail of gunfire and we see their bullet-riddled and somewhat bloodied body. At parents’ discretion, this movie is probably best for kids ages 12 and up.