A ham-handed treatment of Hardy's Victorian novel that does the feminist inspiration for the film a frustrating disservice.
Jessica Gibson|May 1, 2015
Image: Fox Searchlight
Carey Mulligan and Matthias Schoenaerts in ‘Far from the Madding Crowd’
Our Rating

What’s in a name? There’s a lot to unpack in this one: “Bathsheba Everdene.”

Bathsheba, of course, was the woman with whom King David had an adulterous affair in the Old Testament book of 2 Samuel. And “Everdene” has a new contemporary context from Katniss Everdeen, the strong-willed heroine of The Hunger Games franchise whose last name is borrowed from the protagonist of Thomas Hardy’s 1897 novel, Far from the Madding Crowd.

Thomas Vinterberg’s adaptation of the Victorian novel opens with Bathsheba (Carey Mulligan) narrating her opinion on her name—she hates it. She says it sounds wrong when said aloud, like it belongs to someone else.

Though this is the only piece of narration in the whole movie, it does a surprisingly apt job of summarizing what’s wrong in the whole movie: Vinterberg’s vision of Bathsheba doesn’t belong to the character she had the potential to be. There’s a vague sense throughout Far from the Madding Crowd that the source story deals with something really meaningful, but none of that significance is fulfilled by the movie. What viewers are left with is a flop of a film that weakly gestures at ideas that deserve a lot better.

Bathsheba begins as the quintessential, independent-woman-who-don’t-need-no-man: she behaves in a blunt, authoritative way, she aspires to run her own farm, and above all, she detests conventional Victorian marriage. She says as much herself when she turns down her first proposal from gentle shepherd Gabriel Oak (Matthias Schoenaerts). “I’m too independent for you!” she asserts. “If I were to marry, I’d want someone to tame me, and you’d never be able ... 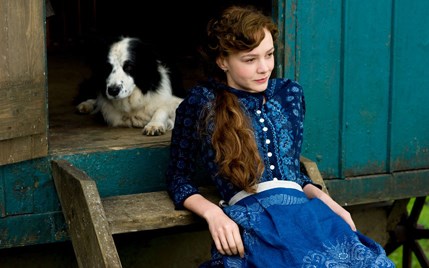