There is more to life than survival.
Alissa Wilkinson|May 13, 2015
Image: A24
Kodi Smit-McPhee and Michael Fassbender in 'Slow West'
Our Rating

Slow West is not really a Western. It's more of a romance, with tragic Shakespearean overtones. Jay (Kodi Smit-McPhee) is a 16-year-old Scotsman traveling solo across the American continent in search of his love, Rose (Caren Pistorius), who fled Scotland after—he tells a stranger—an accident occurred back in the home country that was his fault.

That stranger is Silas (Michael Fassbender), who also narrates the film, which turns out to be a sort of redemption story that starts with a good old-fashioned “once upon a time.” Silas is an outlaw—“there were few of us left, men beyond the law,” Silas tells us, in the twilight of the West—and his old gang catches up with him, including Payne (Ben Mendelsohn), who totes around absinthe and wears a fur coat.

As you might imagine, shoot-outs ensues. But true to its name, Slow West takes a long time to get there, and gives us achingly gorgeous vistas in the process, shot by Robbie Ryan, who has worked several times with British virtuosa Andrea Arnold. Interestingly, it's set mostly in New Zealand (one of its spiritual kin, John Hillcoat's The Proposition, was shot in Australia), though it works as a dreamscape dead ringer for the western United States.

Slow West won the Grand Jury Prize at Sundance this year. It's writer/director John Maclean's first feature, and despite its name, it is steady, but not crawling. It's in the family of Kelly Reichardt's Meek's Cutoff, which is to say that it sees the American West predominately as a dangerous place, rather than a heroic place. Maybe it takes an outsider to see it that way, given how firmly the mythos of the cowboy is embedded in the American imagination. ... 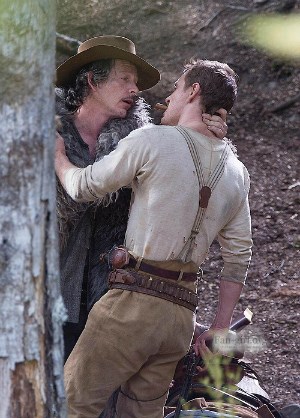