Editor's note: the following is a review from the Toronto Film Festival, where the film premiered in September.

My biggest fear going into Spotlight, the historical drama which reenacts the Boston Globe’s exposé of clergy sex abuse in the Roman Catholic Church, was that auteur Tom McCarthy would find some way—probably through lionizing the journalists—to recast this horrific chapter of our history into a feel-good story. In America, we don’t mind movies that ask us to pity victims. But we sure seem to hate anyone or anything that asks us to not feel quite so good about ourselves.

I had nothing to worry about.

If anything, Walter Robinson’s (Michael Keaton) biggest epiphany is a bit of a Schindler moment: Why didn’t I do more? As Robinson and his team of investigative reporters act as our surrogates, they don’t lead us into the temptation of self-righteous hindsight, nor do they deliver us from realizing that we’re complicit in our silence. Spotlight is a serious film, both artistically and morally, and it wrestles with explosive content while never feeling exploitative or self-aggrandizing.

The story begins when Marty Baron (Liev Schreiber) takes over the Globe. It is 2002, and newspapers are already feeling the effects of the Internet. In one pointed establishing shot, we get a billboard for AOL that reminds us of just how much our communication methods can change in a decade.

Robinson worries, not without cause, that his team’s investigative model—picking their own stories, doing research for a year or longer, supporting four full-time salaries—will soon be unsustainable. Yet when Baron asks him to see if there is any fire behind the smoke surrounding the case of a pedophile priest, Robinson is reluctant. This is Boston. “Thou Shalt Not Embarrass the Roman Catholic Church” is both an eleventh commandment and a survival mantra.

Reluctantly, the team starts digging. Michael Rezendes (Mark Ruffalo) camps in the office of lawyer Mitchell Garabedian (Stanley Tucci), who is representing scores of victims in multiple lawsuits. Sacha Pfeiffer (Rachel McAdams) talks to a victim from a support group, and she knocks on doors looking for others. She finds one priest who admits “fooling around” with several kids, but insists he is without remorse, because he took no pleasure in it. Robinson chips away at his friend Jim Sullivan (Jamey Sheridan), trying to get confirmation from someone who had a hand in prosecutions of how extensive the scandal might be.

Spotlight most resembles All the President’s Men. Both films present journalism not as an exotic movie profession but as a sometimes tedious, usually inefficient means of groping after the truth. Investigations consist of knocking on doors, poring through archives, sitting in offices, and generally trying to get other people to confirm what the reporters already think they know but can’t yet prove.

Some viewers might be put off by the movie’s focus on the case’s procedural elements. Early on, Baron asks Robinson to focus the story not on any one priest or victim, but on the systemic nature of the cover up. They argue that this focus—and only this focus—will be enough to keep the system from perpetuating abuses. 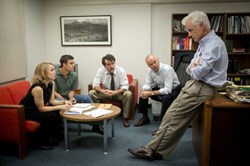 There is logic in this argument, but it does make the story more abstract. Even though the film features interviews with two victims and lets us glimpse of a few others, there’s never really a face on the scandal’s human cost. Only in one late scene, in which Rezendes glimpses some kids waiting in a conference room, does it truly sink in for him (and us) that each name on their ever-growing list represents a shattered life.

There is another way in which the film may frustrate some viewers. It almost exclusively focuses on the professional lives of the Spotlight team, rather than their personal lives. As in Law & Order, we get dribbles of personal information, but only as they come out at work. Matty Carroll lives near a “treatment” house where he knows inactive pedophiles are living, and wonders if he can justify not warning his neighbors. Sacha has a nana that goes to church three times a week, and she wonders how her family will feel about her exposing the church. Rezendes is married but lives in a shabby apartment; the same qualities that make him an effective reporter apparently make him a less than effective spouse.

This silence on the characters’ personal lives robs the film of some of its emotional impact. But gradually, as the story inches forward, something amazing happens. The actors start showing the toll that moving into the light is taking on them—through pained grimaces and hunched shoulders, through knowing glances and stunned silences. Instead of giving the characters (and us) the release of voicing their indignation too often, McCarthy lets the immensity of what is being revealed dawn on them slowly and wear on them steadily.

Michael Keaton, especially, is phenomenal here (yeah, better than in Birdman), showing just the right amount of stubborn resolve tinged with strains of regret. Stanley Tucci plays Garabedian as a man less interested in tilting at windmills than being the good Samaritan in a land that neither wants nor thanks him. He turns in yet another stunning performance and remains one of our most consistent, yet generally unheralded character actors.

Spotlight is all the more powerful for being so understated. Ultimately, I would argue, the toll of bringing the truth to life, and the sheer horror of that truth, while never expressly stated, is evident in each character’s numbed, pained incredulity. If it is true, as Shakespeare once wrote, that the evil men do lives after them, perhaps one of the greatest goods we can enact is to finally acknowledge that evil and speak the truth about it.

Of course, doing so will not change the past, but it can change us in the present. But if we come to care more about the “least of these” than we do about our own or God’s reputation, perhaps we will have taken the first small step towards becoming a light, rather than cursing the darkness.

The “R” rating here is primarily for the subject matter; there are sexual references, particularly when victims of sexual molestation recite their testimony.