Near-death experiences make for popular books and movies. But what should Christians do with them?
Scot McKnight|September 11, 2015
Image: Samuel Goldwyn Films
Kate Bosworth and Hayden Christensen in '90 Minutes in Heaven'

Hayden Christensen and Kate Bosworth in '90 Minutes in Heaven'

Don Piper’s story, now made visible in the movie 90 Minutes in Heaven (out this weekend), records his experience of “dying” as a result of a head-on car crash and experiencing some moments (90 minutes of them) of glorious encounter with “heaven” where God, a suffusing and overwhelming light, resided in the middle of the heavenly city.

In that near death experience (NDE), Piper saw and heard the voice of many of his fellow Christians as they were journeying toward the gate of heaven—but he never entered. A fellow pastor was praying for his recovery at the crash scene, and he found himself singing along with the pastor, back on earth.

The slow-developing movie focuses far more on the pain both Piper (Hayden Christensen) experienced and his family, especially his wife (Kate Bosworth), endured as he lay in hospital beds for months—suffocating with a desire to return to heaven and unwilling to communicate either about his NDE or what was happening in his soul. The slowness of the scenes accentuates the slowness of his recovery. But recover he did, to find a purpose in life—to tell people that heaven is real and that prayer really works.

Piper’s story is encouraging, and surely in the top two or three of hundreds of NDE stories I have read.

I do not disbelieve Don Piper’s story. He seems credible, and his experience is far from unusual. Mally Cox-Chapman, a skilled journalist, read and interviewed and tracked down one story after another. In her book The Case for Heaven: Near-Death Experiences as Evidence of the Afterlife, we read the fairly common pattern of near-death experiences:

Not everyone has each element. But the pattern is so common, and spans the religious spectrum so noticeably, that we can speak intelligently of the “NDE Pattern.” Christians of all stripes, Muslims, Buddhists, and others tell similar stories. In fact, there are NDE stories going all the way back to ancient Egypt and ancient Rome. Many of those stories have similar elements, though each religious orientation causes a reshaping of those elements.

Piper experienced the first two, not the second, the fourth, not the fifth, clearly the sixth and the seventh, and from that point the last two elements have reshaped his life and ministry. And the movie shows far fewer specifically Christian themes than his book did.

And I have another concern: If death is irreversible, how can these be seen as experiences of what happens after death? Most would say these people have not, in (scientific) fact, died. Instead, they have entered into a pre-death experience that may glimpse heaven or the afterlife (or it may do neither).

But is not the deeper ache for an “after-death” experience? One where someone has scientifically died and told us what is in the Beyond? (We have such an account in the Gospels of the New Testament.) 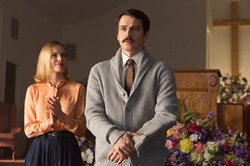 Kate Bosworth and Hayden Christensen in '90 Minutes in Heaven'

The issue then is what to make of NDEs. After studying story after story of the NDE Pattern, Cox-Chapman landed on at least three conclusions, and these conclusions need to be considered before we rush to affirm too quickly the truthful witness of NDEs.

First, Cox-Chapman concludes that those who have an NDE become believers in an afterlife or in some kind of heaven. This is surely Piper’s experience.

Her second conclusion ought to warn those who find their faith most confirmed by these NDE stories: those who have NDEs become more universalistic in their faith. (I have not read anything by Piper that would indicate this, but there is plenty of evidence in NDE collections that this occurs.)

Cox-Chapman’s final conclusion startled me: the diversity of the experiences and the variety of religious ideas at work in those experiences lead her to conclude that “we will be provided with the Heaven that is right for each of us.”

That is, NDE studies make us think each person gets the heaven they want.

This is where our deepest concern breaks through the surface: the variety of NDEs, if they are true experiences of the afterlife or heaven, may well be a deconstruction of all faiths.

So a very serious issue arises for anyone who cares about how Christians determine what Christians are to believe about heaven and NDEs. In other words, if many Christians—the numbers who buy NDE books, the numbers who go to this movie—believe a story like Don Piper’s because it confirms their faith, a faith that comes from the Bible, then they are only believing what the Bible says, and don’t need the NDE story. In which case, let’s focus more on the Bible and bring the discussion back to what the Bible clearly teaches.

My reading of hundreds of NDE stories is that they in fact often don’t confirm what the Bible says. In fact, they bring into the light the faith and convictions and suspicions and hopes and dreams of what that person already believed. In this case, the Bible is being pushed to the side for the sake of the experience.

Again, this more negative consideration can be stated from a slightly different angle: if you believe the elements of the NDE stories because of the power of the experiences, you will need to believe every element in these stories. Which leads me to a question that haunts me every time I hear fellow Christians clap so loud about NDEs: How then does one distinguish which elements in these NDE experiences is what heaven is really like from what is not? I just don’t know that there’s a way of believing in the experience of the NDE, filtering out what is unbiblical and affirming as a witness to heaven what matches the Bible.

It seems to me in the flourishing of these NDEs, many Christians will want once again to take a whole new look at what the Bible says about heaven. What they will find, in almost all cases, is a view of heaven that is quite unlike what is experienced in the NDEs.

Scot McKnight is a New Testament Professor at Northern Seminary, the writer of the popular blog Jesus Creed, and author of the forthcoming book The Heaven Promise: Engaging the Bible’s Truth About Life to Come, (Oct. 6, WaterBrook Press).