One wintry Minnesota morning when I was nine or ten, in the cold, dark hours before the sun would peek over the snowy woods and fields to the east of our farm, my mother shook me awake and asked me to go outside with her. I followed her downstairs, where she put on her old green parka and I, blinkingly, fumbled into my downy coat and snowpants. We went outside and she pointed to the night sky. At once I was filled with wonder and fear.

The aurora borealis, the Northern Lights, stretched and writhed in the sky above like a shimmering emerald snake wrapped around the world. As my mother walked to the barn, a milk pail dangling in her hand, I cowered beside her while stealing glances at the sky. As she went about her chores in the barnyard, I hid inside a doorway and peered upwards. For the first time in my life, I became aware of something utterly, even incomprehensibly, beyond myself. In that moment, I became like the stargazers of the Middle Ages, who looked on the night sky and saw not mere radiation and configurations of gas particles but the gates of heaven itself.

Around the same time, on the other side of the planet, the night sky of the Australian outback captured the imagination of another youth. Sean Murray, an Irishman whose family transplanted to the outback during his childhood, spent his evenings spellbound by the vast, twinkling vision of the Milky Way galaxy that blanketed the night sky. Unobscured by the light pollution of cities, Murray’s sky glittered and glistened in luminous brilliance. Murray grew up to be a programmer and video game developer. He worked on a variety of different projects and eventually launched a small, independent game studio called Hello Games. Through it all he never gave up on his fascination with wandering the stars. On August 9, after several years of development fraught with delays, Murray’s small studio released their latest project, No Man’s Sky, a highly anticipated sci-fi space exploration game set in a galaxy without end.

Hello Games’s small team set out to accomplish an impossible feat. Harnessing some clever mathematics, No Man’s Sky generates whole galaxies of unique star systems populated with a number of individual planets, each with their own particular flora and fauna.

The possibility of exploring an infinite galaxy teeming with wonders immediately captured the imaginations of gamers since the first videos and screenshots surfaced more than two years ago. But, along with the hype, there has come a nagging skepticism whether Hello Games could actually pull off the promise of an infinite living galaxy to explore. Now that the game has released, gamers are finding out that, impressively, No Man’s Sky follows through on that promise. But even as the game fascinates with unfettered exploration, it cannot escape the limits imposed on the imagination by our modern worldview.

Players awake next to a crashed starship on a strange, unnamed planet. After a brief tutorial, the player must repair their starship before setting out to travel the stars. Once a player has a handle on the basic mechanics, they are free to explore planets, gather resources, and catalogue alien plants and animals as they please. In that sense, the gameplay echoes the exploits of a 19th-century natural philosopher as much as a far-future galactic explorer.

In No Man’s Sky, the player hops between planets and stars with ease. Interacting with alien races and buried ancient artifacts are a basic affair, conducted with a few quick button presses. Overall, the game is much more interested in the player staring out across its beautiful vistas than fiddling about with complex systems. 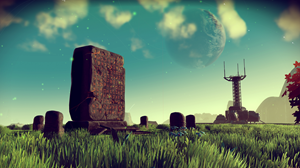 This is perhaps the biggest draw of No Man’s Sky: vibrant landscapes of saturated reds, blues, and greens fall away in the distance into massive and colorful alien skies, where other planets loom like watchful giants on the horizon. These sights instill in the player a sense of awe, immensity, and beauty, and all without tugging on the player’s arm and shouting, “Hey! Did you see that cool landscape?” At a time when many video games push and prod the player until they get to a preprogrammed, thrilling spectacle, No Man’s Sky invites the player to hold back and stare. If Murray’s goal was to render his experience of the sublime outback night sky into a game, he has succeeded.

There is no real narrative to speak of in No Man’s Sky. The game offers a couple optional paths to follow through the galaxy which provide players accustomed to structure a kind of railing to hold on to as they explore, but pursuing those paths is more likely to deepen the mysteries of the universe rather than explain them. There is a nominal goal of traveling to the center of the galaxy, but arriving there resolves little. Given the time it takes to journey to the center, it is likely that most players will never see it. Ultimately, the game wants to players to behold its beauty and immensity, to inhabit the wonder and mystery of the cosmos. Any meaning found in No Man’s Sky is imposed on the universe by the players themselves, not by a premade story created by the game’s designers.

This echoes Charles Taylor’s description of the “disenchantment” of the world in his famous book, A Secular Age. Whereas human beings had previously seen created things as signs that pointed towards heaven, shifts in popular thought meant that now the individual was what gave things meaning. The stars no longer signified God; they meant whatever we felt them to mean.

This severing of our connection to the divine leads to an ill-defined uneasiness and discomfort in our modern age. There is a certain something missing in the modern person’s life that they can’t quite put their finger on. Taylor terms this feeling the “malaise of immanence.” It is that nagging dissatisfaction in a world sealed off from divine possibilities. 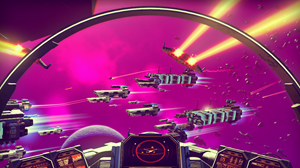 No Man’s Sky senses this discontentment, but can only offer wonderment to soothe the unease. Hello Games’s imagined universe has neither the unswerving optimism of our scientists nor the cosmic nihilism of our pessimists. It offers only endless, breathtaking beauty. While No Man’s Sky strains against the boundaries of a world closed off from the divine, it ultimately cannot escape them.

Sean Murray and his team’s achievement recalls the thoughts of another Irishman who was fascinated with the cosmos, C. S. Lewis. In The Discarded Image, Lewis encourages readers to stand under the starry heavens and imagine them as they were understood in centuries past, when the Earth lay at the center of the cosmos, surrounded by concentric rings of ”celestial spheres” that held the planets, stars, orders of angels, and over and above them all the Empyrean, the dwelling place of God.

This is the cosmos through which the poet Dante ascends in his Divine Comedy—which Lewis views as a work of science fiction. According to the laws of nature as then understood, the love of Christ within Dante propelled him, like an astronaut, through the celestial spheres of Venus, Jupiter, and so forth on to the throne of God. This wasn’t simply metaphor—it was the most up-to-date map of the cosmos.

Lewis argues that our models of the universe aren’t simply the calculated outputs of careful scientific endeavor; they are instead reflections of the age’s spiritual state. Due to shifts in philosophy and art, the popular imagination becomes open to new possibilities about how the world really is. New currents of thought prepared Western society to accept the idea that greater things follow from inferior things well before Charles Darwin brought us the scientific theory of evolution. Lewis suggests adoption of such new theories might not have been possible at all had culture not already longed to be out from under the eye of God. In sum, as Lewis writes in the essay The Funeral of a Great Myth, “Probably every age gets, within certain limits, the science it desires.”

Our Fiction Reflects Our Reality

Our science, then, and the fiction born from the universe our science depicts, act as a sort of spiritual assessment of the times.

Dante’s Divine Comedy sketched a medieval portrait of the universe as ordered, structured and filled with meaning by God, who rules it all. The novels of early 20th-century horror writer H. P. Lovecraft reflect the fear of an indifferent, meaningless universe, stirred by the Nietzschean nihilism of his day. More recently, the 1960s gave us Gene Rodenberry’s original Star Trek series, which was laden with a naively optimistic humanism. Cynicism of man’s will to power then gave us darker science fiction like Alien and Outland in the early ’80s. We find paranoia of technology in 1999’s The Matrix and dreams of transhumanism in the Battlestar Galactica reboot from 2004. And Andy Weir’s recent bestseller, The Martian, which received a popular cinema adaptation last year, encapsulates modernity’s confidence in the scientific method as a means of human salvation. 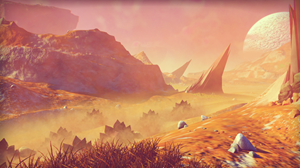 No Man’s Sky also reflects the spirit of our age. It is a portrait of a universe not endowed with any inherent sense of meaning or purpose. The path through the stars in No Man’s Sky leads not to the throne of God, as in Dante’s vision, but only to more stars. Algorithms endlessly generate new planets with new flora and fauna, so one can never “conquer” the universe. It also frustrates the modern confidence that science and raw human determination can learn everything there is to know to about what lies beyond our atmosphere. The universe in No Man’s Sky is indifferent to our attempts to know it. Yet it is beautiful, filled with more light and color than there is in our own universe. There is no end to the game’s beauty, most of which will never, ever be seen by players—the cosmos that Hello Games created is beautiful in itself, without needing a player to come around and think it so. At the end of the day, the endless beauty that No Man’s Sky creates is just…there.

Therein lies both the triumph and tragedy of the game, and, ultimately, its truth. The mathematics behind the game create infinite beauty, but endless as it is, that beauty can never fill the missing piece of the human spirit left by our disenchantment. The heavens of No Man’s Sky do not point to God, only the void created when modernity banished him from our imagination. Players will not find God as they journey through these stars. But perhaps, as they marvel at the wonder of the game’s stunning vistas, they may very well notice the stark emptiness among those stars and planets—an emptiness only God himself can fill.

Chris Casberg is a former Marine Corps translator and a graduate of the University of North Carolina at Chapel Hill. His writing on faith and videogames has appeared in The Gospel Coalition, Christ & Pop Culture, Gamechurch, and more.