In the latest installment from the rebooted franchise, the gang is back at it, trekking amongst the stars—though if you thought their bold going where no man has gone before might reach new heights in this movie, you're out of luck. The Beyond in Star Trek Beyond was probably just something someone came up with because it sounded cool. That's its only real flaw: that it's a trenchantly conventional take. 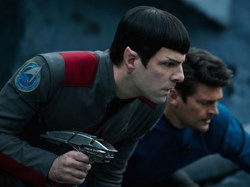 Zachary Quinto and Karl Urban in 'Star Trek Beyond'

But that might be okay. In a summer top-heavy with ponderous apocalyptic superhero movies and depressing underachievers, Star Trek Beyond is a breath of fresh air—not a clever or innovative movie, but one with at least an idea in its head and the dose of optimism we all need right about now.

In this installment, Kirk (Chris Pine) is getting a little tired of life out among the stars (in a wink at the audience, he narrates in a log that life feels like it's getting kind of episodic). He's applied for a job as a vice admiral, which would ground him a bit more. Spock (Zachary Quinto) is feeling a similar impulse. Neither of them are telling each other.

The crew is called in to rescue a stranded ship, but soon realize it's an ambush. The crew is separated and must find each other on the planet, while dodging various dangers and meeting Jaylah (Sofia Boutella), who's been living on the planet for a while and is the key to helping them get out alive.

That's because Krall (Idris Elba) is after them. Krall is a headscratcher of a villain for a good deal of the movie, apparently just inexplicably bad to the bone. Eventually we find out his backstory, though, and it underlines the movie's main idea: that there is “strength in unity,” as Lt. Uhura (Zoe Saldana) tells Krall at one point. The Federation, they claim—even despite its faults—is a good thing, and it promotes peace, and it is worth preserving. We are stronger together than apart. 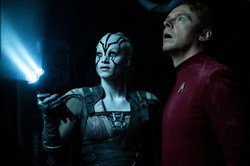 Sofia Boutella and Simon Pegg in 'Star Trek Beyond'

You can guess where it goes from there: this is, after all, still a summer blockbuster, and the usual things have to happen involving a number of innocent lives being in danger and Our Hero swooping in to fight the villain and save the day. But it’s a blockbuster for nerds who think it’s fun to hear characters straightfacedly hollering coordinates and sectors and (I presume invented) technological orders.

Science fiction is a marvelous vehicle for exploring political and social concerns, and Star Trek has a tradition of promoting pluralism and tolerance through its stories. Beyond's insistence that strong alliances and friendships are our best bet at survival is timely—especially released against the backdrop of the American political party conventions marked by internal warring, as well as heightened tensions between citizens and police. Beyond also suggests that sometimes that unity fails and leaves the weak behind, and that the consequences of this are dire and sobering.

The film's faith in people's ability to work together for the greater good is, at times, a bit utopian—but it's a welcome, and even optimistic, relief from usual summer fare. That the characters still address one another, even during the moments of greatest peril, with the honorific “mister” before their last names fills me with a rosy golden-age nostalgia, and I’m okay with that.

And thankfully, good scifi is usually pretty fun, too. This one, directed by Justin Lin (Fast and Furious 3-6) benefits from the quirky humor of its co-writer, Simon Pegg, who's also playing Scotty. That sense of humor is a godsend and the most original thing about the movie—for some reason, cracking a joke and having it land seems hard for blockbuster writers, but Beyond gets it. Zingers and character-driven humor lighten the mood whenever it threatens to grow too self-serious. And I dare you not to grin broadly when one truly glorious set piece near the end is revealed. (You'll know it when you see it.) 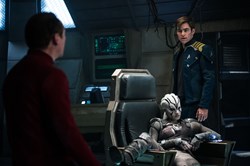 The movie also works in Leonard Nimoy's death (he died February 27, 2015, before production began) by letting Spock mourn Ambassador Spock's death. With Anton Yelchin, though—the talented young actor who portrayed Chekov, and who died very recently in a freak accident—the movie can't afford us that same experience, but Nimoy and Yelchin are both memorialized during the credits.

The movie is framed like a Star Trek episode, with Kirk’s voiceover at the beginning and end, so while the films thus far have been a sort of reboot of the Star Trek world, so maybe now they’r are moving into TV mode. (Incidentally, according to its creators, the new Star Trek TV series slated to begin airing next year is not related to these films.)

And in choosing this life as a Starfleet commander, Kirk knows his life will be episodic. But that's life. And when you're with the people you love, Star Trek Beyond suggests, even the banal days have purpose.

There are scenes of peril, which shouldn't surprise anyone, but they're not very frightening. A couple people use low-level profanities a few times. You may have heard that one male character is seen briefly twice with a man we're to understand (having seen his wedding ring earlier) is his husband, along with their small child; some readers may choose to discuss this with their children and teenagers, but also, be aware that these scenes are very brief and probably not noticeable to the vast majority of younguns.

Alissa Wilkinson is Christianity Today's critic at large and an assistant professor of English and humanities at The King's College in New York City. She is co-author, with Robert Joustra, of How to Survive the Apocalypse: Zombies, Cylons, Faith, and Politics at the End of the World. She tweets @alissamarie.