Presidents have often included some mention of abortion in their State of the Union addresses. This week, President Obama broke from this tradition. 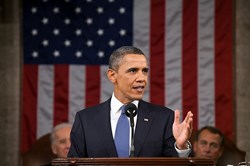 His speech on Tuesday featured both big ideas and specific policy proposals. It did not, however, include any nod to pro-choice groups.

Abortion was notably absent Republicans' responses, too. The official Republican response by House Budget Committee chairman Paul Ryan (R-WI) only alluded to abortion when he said that one responsibility of government was "to protect innocent life."  He did not reference any specific policies.

Tea party leader Rep. Michelle Bachman (R-MN), who is pro-life, also remained mum on the issue during her alternative GOP response to the SOTU.

Ashley Horne of Focus on the Family's CitizenLink said, "What I would have loved to see was the GOP to give a little more attention to the life issue. The GOP rode in on a wave of pro-life voters. This is why they're here. Pro-family, pro-life voters, the conservative movement ushered them in. And for good reason."

The House of Representatives is expected to take up several pro-life bills, including the No Taxpayer Funding for Abortion Act. This bill would permanently ban the prohibition against using federal funding to pay for abortions. Currently, the ban must be renewed each year, and the ban on federal funding for last year's health care law is an executive order.

"President Obama recognized the important role of parents in the educational achievement of their children. President Obama himself has set an example as a father and husband. However, the agenda he has pursued and articulated tonight does not strengthen the kind of family children need: one with a Mom and Dad," Perkins said.

Jim Wallis, president of Sojourners, said he hoped that Democrats and Republicans could come together to work on issues that both sides find problematic, including the economy, unemployment, Social Security, banking, immigration, health care, federal deficit, and the war in Afghanistan. To solve these, said Wallis, both parties need to listen to each other.

"Until we have listened long enough, carefully enough, and respectfully enough to the legitimate concerns of the other side, we will never accurately understand the issues, problems, disagreements, and ways we can find possible common ground — or, at least, the necessary compromises," Wallis said. "Even when there are clear clashes of interests that must be debated, won, or lost, it is still helpful to understand what those differences really are."

The Southern Baptist Convention's Ethics & Religious Liberty Commission (ERLC) listed its own legislative agenda for the coming year. Many of its top issues were excluded from the SOTU and the GOP responses. In addition to abortion, the ERLC wants Congress to pass a federal constitutional marriage amendment and block "the homosexual agenda."

The ERLC expects the current Congress to be friendlier to its policies than the previous one. ""We spent most of our time resisting liberal efforts to undermine biblical values. Regrettably, we could not stop them all. Some of those losses were significant. Yet we remain encouraged. Many of the efforts to undermine biblical values failed. Southern Baptists stepped up when called on. Millions of Christians prayed," wrote the ERLC.

The ERLC also listed other issues that were included in the SOTU, including immigration reform. Last year, immigration reform bills failed to become law despite lobbying efforts by the ERLC, the National Association of Evangelicals, and other faith-based groups. Obama spoke on the need for immigration reform such as those that were in the DREAM Act, a bill that would let minors who are illegally in the U.S. become citizens if they join the military or finish college.

Faith in Public Life's Dan Nejfelt said Obama's remarks show that faith-based groups had an influence on the policy process.

"After the heartbreaking defeat of the DREAM Act, one can be forgiven for being less than optimistic about immigration reform's political prospects in the near future," said Nejfelt. "But a mention in the State of the Union at the very least signals that the faith community's effort to keep the issue on the agenda when politicians wanted to sweep it under the rug has made a difference."