Update (Sept. 16): Pat Robertson runs Regent University once again, serving as CEO until the school finds a replacement for Carlos Campo, who replaced Robertson after his 2010 retirement.

"It's not the result of any moral or fiscal issue on my part or the university," Campo told The Virginian-Pilot, which broke the news. (The Associated Press also reported the resignation.)

Campo, who replaced Pat Robertson in 2010 and was the first Latino president of a regionally accredited Christian university in the United States, stated in a press release:

"I am blessed and honored to have served as President of Regent University. It's been a privilege to work with the staff, faculty and board to serve our students. I would also like to thank the great people of Hampton Roads who have made us feel so welcome in this community." 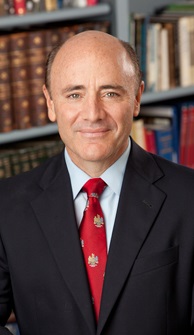